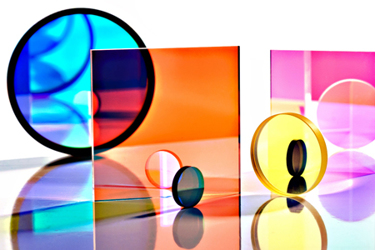 The following defines a number of glossary terms related to thin film optical filters and their use.

The angle at which a filter is tilted relative to the primary ray. For example, an AOI of 0° means the primary ray is perpendicular to the plane of the filter.

A filter that transmits a band of wavelengths while blocking the wavelengths on either side of the passband.

The level of rejection of light outside the passband.

The range of angles of light incident on the filter about the AOI.

Average of transmission or reflection across the cone angle

A filter that transmits one band and reflects a different band

A filter that blocks a narrow range while transmitting wavelengths on either side of the blocked wavelength range.

The negative logarithm (base 10) of transmittance (T). (T on a zero to unity scale)

The range of wavelengths that are desired to be transmitted.

The orientation tolerance allowed between a feature of interest and a reference datum. For plano-plano optical filters, the term describes how parallel the two main surfaces of the optic are to one another.

Variations in transmission in the passband.

Rate of change of the spectrum from a passband to a blocking band.

Distortion of the wavefront of a plane wave as it transmits through a filter, generally given in units of the HeNe wavelength of 633 nm.