Today's cars and trucks provide an unprecedented level of comfort and convenience, with considerable emphasis on reducing cabin noise to ensure the best possible driving environment. So, the last thing that an automaker wants to hear when testing its new vehicles is a pervasive humming sound that seems to emanate from nowhere. But this is exactly what one major automaker discovered while testing the vehicles coming off its assembly line - a mysterious humming sound that had their engineers stumped.

They turned to ZYGO's industry experience and reputation to help in the investigation. Using state-of-the-art non-contact surface metrology instrumentation and optical technologies, it was identified that the humming sound was due to microscopic waviness on the gear teeth in the rear differential unit – one of the vehicle's major drive components. The waviness was a result of the machining process and had gone undetected by traditional inspection technologies.

With the root cause of the problem positively identified, the gear manufacturer was able to refine their production process to eliminate the noise, but still needed a fast, quantitative and reliable way to continually monitor the process to ensure the problem did not recur. Due to the production volume and tolerance of this critical component, ZYGO collaborated with the manufacturer to embed the precision metrology instrument right in the production line, instead of sending the gears to a metrology lab and waiting for the test results. ZYGO was able to recommend this efficient approach because its metrology instruments are vibration resistant, enabling them to deliver reliable, precise measurements in a production environment. 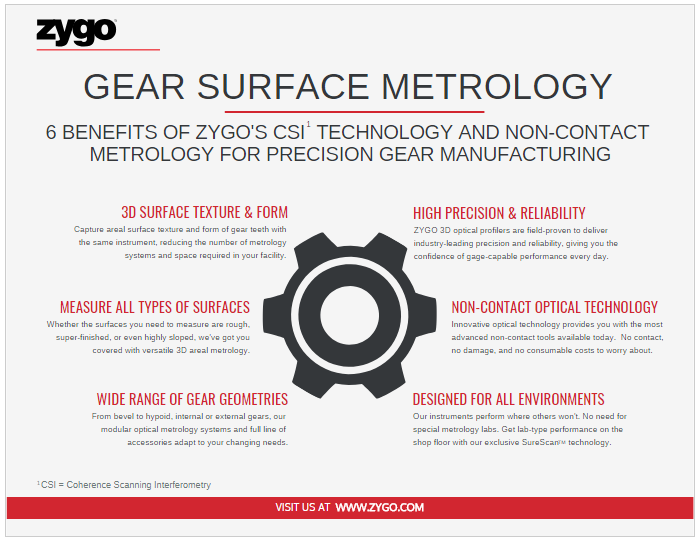