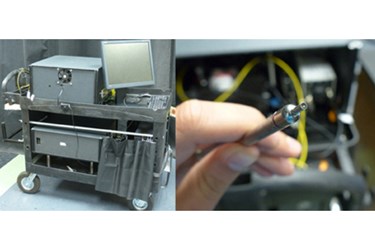 Researchers at the University of Texas at Austin (UT Austin) may have found a way to improve the early detection of skin cancers and reduce the number of unnecessary biopsies with a new, 3-in-1 optical cancer probe.

The most common forms of cancer in North America are those found on the skin, according to a recent press release from the American Institute of Physics (AIP). The most deadly of these, Melanoma, kills nearly 10,000 people every year in the United States.

Currently the only way to diagnose skin cancer with certainty is to perform a biopsy, stain the tissue, and look at the tissue sample with a microscope in an attempt to find cancer cells. Up to 25 negative biopsies are performed for every cancerous lesion that is found, which translates into costs of up to $6 billion per year in the U.S., according to the AIP article.

The UT Austin research team, led by Dr. James Tunnell in the biomedical engineering department, has worked to develop a device that uses optical technologies instead of traditional biopsies. Three spectroscopic modalities have been combined into a single device: Raman spectroscopy, diffuse reflectance spectroscopy, and laser induce fluorescence spectroscopy. Each of these provides different information when used to study the skin and, therefore, a more complete picture of the skin health can be achieved with a single exam.

For example, diffuse optical spectroscopy can detect changes in hemoglobin, and Raman spectroscopy detects changes in connective tissues and other cell constituents. While other people have combined spectroscopic techniques in their diagnostic approaches, the UT device is the first to combine all of these into a single, inexpensive probe. Lower costs may translate into a wider use in clinics and doctor’s offices.

“Skin is a natural organ to apply imaging and spectroscopy devices to because of its easy access,” Tunnell said in the AIP press release. “This probe that is able to combine all three spectral modalities is the next critical step to translating spectroscopic technology to the clinic.”

The equipment used to perform this test was reviewed and characterized in a recent paper published in the AIP’s journal Review of Scientific Instruments. The system is composed of a fiber optic probe about the size of a pen, an associated computer for analysis of the data, the spectroscopic equipment, and a cart to transport the device easily and quickly. Each exam takes about 4.5 seconds to perform.

New ways of reducing diagnostic costs by increasing in-office capabilities for physicians are constantly being developed. On a similar note, rapid optical diagnostics have also been used in other applications like detecting the presence of bacteria or viruses.