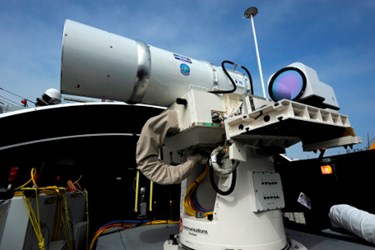 United States President Barack Obama's signing of the year-end defense bill will increase by more than half the U.S. military's funding for laser weapon systems for fiscal year 2017.

Of the $618.7 billion in overall spending appropriated under the National Defense Authorization Act (NDAA), approximately $328 million was earmarked for the development and procurement of laser weapons in 2017, a 51 percent increase from 2016 spending levels, according to Military Times.

Continuing success by the U.S. military in developing directed-energy technologies – those that produce a beam of concentrated electromagnetic energy or atomic or subatomic particles – and those technologies’ potential to thwart emerging asymmetric threats while offering significant cost savings, have convinced lawmakers to put in additional funding for high-energy lasers and RF-based technologies.

“The Department of Defense has made significant advances in the development and operational demonstration of directed-energy weapons systems," stated Congress, according to Military Times. "Each military department has demonstrated a marquee program in this area, such as the Navy’s Laser Weapon System (LaWS) deployed on the USS Ponce, the Army High Energy Laser Mobile Demonstrator (HEL-MD), and the Marine Corps’ Ground Based Air Defense System (GBAD)."

The Navy's LaWS system uses heat energy from lasers, and has successfully been used to disable or destroy both stationary and moving targets, such as unmanned aerial vehicles (UAVs). It was upgraded before installation on USS Ponce for at-sea testing in the Persian Gulf in 2014, and has been operational since this year. The LaWS weapon system consists of a single laser weapon control console, manned by a surface warfare weapons officer aboard USS Ponce who can operate all functions of the laser — and if commanded, fire the laser weapon.

The Army's HEL-MD is the first mobile, high-energy laser, counter rocket, artillery and mortar (C-RAM) platform installed on military vehicles. In 2014, it was demonstrated to be capable of neutralizing more than 150 aerial targets including 60 mm mortars and unmanned aerial vehicles (UAVs). Future iterations are planned with even higher-powered lasers.

The Marine Corps' GBAD is a Humvee-mounted short-range laser weapon system with a minimum power output of 25 kW, capable of defeating low-flying threats, such as enemy drones. According to Military Times, the program is entering phase two of three — graduating from firing a 30-kilowatt laser while immobile to firing while on the go.

Foreign enemy states and terrorists increasingly are deploying drones against military and civilian targets, creating a sense of urgency to develop laser weapons to disable these threats.

Laser technology was a crucial component of the Reagan administration's proposed Strategic Defense Initiative (SDI) program (nicknamed 'Star Wars') in the 1980s, envisioned for use against intercontinental ballistic missiles, though existing technology of that that time proved less feasible to implement.

Research into lasers and other direct-energy weapons has since advanced, maybe far enough to fulfill lasers’ touted potential in military applications, according to one lawmaker who steered changes into next year's version of the defense bill.

“I hope that the day will come when we could have solid-state lasers in space that can defeat any missile attack,” said Rep. Trent Franks (R-Ariz.), according to the Los Angeles Times. “That day is a long ways off. But fortunately, it’s a little closer, and a little more certain, with the passage of these amendments.”