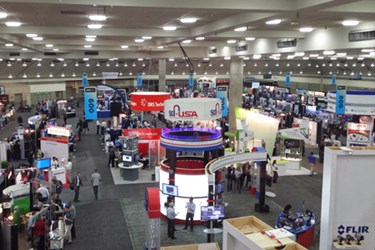 Walking the exhibition floor at SPIE’s Defense and Security Sensing (DSS) conference, I saw firsthand the latest technological innovations in optics, imaging, and sensing for defense, security, industrial, and environmental applications. With more than 450 companies at this year’s event and only three days to explore, it was an almost overwhelming task to try and take in all of the technology on display.

Regardless, I did my best, and here is my list of the top five most exciting technologies I caught at the show.

DSS 2014 was the first event where Excelitas co-exhibited with recently acquired Qioptiq, a custom optics and lens company. Given the unified presentation and the new products on display, the Excelitas booth was full of excitement. One of the reasons for the enthusiasm was a new 12 micron camera from BAE Systems that was on display, which was enabled by one of Qioptiq’s custom lenses. Typically, IR camera specifications include lenses of about 17 microns, so this camera was a marked achievement for the group at the Excelitas booth.

IR #selfie at the @Excelitas booth. Stop by to check out their 12 micron IR camera! #SPIEDSS pic.twitter.com/KrqnxiO6lu

While talking about the Excelitas booth, I would be remiss not to mention the newest member of Excelitas’ YAG series of 1,064 nm silicon PIN quadrant detectors. With less than 1 percent crosstalk between quadrants and greater responsivity (0.6 at 900 nm and 0.44 at 1,064 nm), these detectors can provide OEMs with improved signal-to-noise ratios for greater ranging distance. The overall accuracy of the system is also improved, as the entire surface is responsive to light and has no dead zones between quadrants.

For more on both the IR camera and the silicon PIN quadrant detectors, watch our exclusive interview with Excelitas below.

Sensors Unlimited exhibited two new SWIR cameras at DSS, both of which were attracting a fair amount of attention. The one I found most impressive was the 640CSX, which is a 640 by 512 pixel, 12.5 micron pitch micro-SWIR camera. Its 1.7 W power consumption, compact size (OEM Series: 1.21”W by 1.21”H by 1.19”D, weighing in at 55 grams), and high sensitivity (0.9 to 1.7 micron spectrum response imager; 0.7 to 1.7 microns for NIR/SWIR), make the camera ideal for applications demanding small size, weight, and power (SWaP).

The low power requirements and small size enable integration into handheld, portable devices and UAVs. The camera is also ruggedized and has a high gain dynamic range of 1,700:1 and a low gain range of 800:1, which makes it ideal for imaging high-contrast environments, like urban areas.

For a full rundown on both cameras, check out the video below.

Another exhibitor that seemed to be attracting people magnetically was Umicore. Its booth was buzzing with excitement over the two new lenses they released at DSS. The more impressive of the two— at least at first glance — was a newly redesigned, ruggedized 35 mm lens.

Umicore kept the previous version of its 35 mm lens around to visibly demonstrate the stark contrast between the new design and the older, more cumbersome version. The new 35 mm lens is one quarter of the size of its predecessor. Even more impressive was the difference in weight. When I picked up both lenses to compare, it was hard to believe that they had the same functionality.

The more compact form factor enables integration into handheld units and UAVs. Umicore also extended the design concept for the tiny 35 mm lens and incorporated it into a 75 mm lens. You can see the full details in the video below.

Just visited @Xenicsgroup at Booth 1025 to check out their SWIR camera for both day and night vision. #SPIEDSS pic.twitter.com/UWNQc8m9lY

The Xenics booth was was also brimming with visitors throughout the show. Fortunately, I had an appointment to talk in-depth with the Xenics product experts about their company’s new, ruggedized SWIR camera called the Rufus-640-Analog. Perhaps the most novel thing about this particular camera is its onboard, proprietary algorithm that allows it to adjust to day and night lighting conditions, enabling continuous operation.

The unquestionable favorite of the show and the exhibit that drew the largest crowd was John Hopkins University’s Robo Sally. The DARPA-funded robot has modular prosthetic limbs controlled by telepresence gloves, which enables the robot to mirror the motions of its operators. With the integration of a motion tracking headset, the operator is able to see what the robot sees, which includes IR imaging capabilities.

Members of the JHU Applied Physics Laboratory happily took turns demonstrating the robot’s incredibly dexterous movements, which only hinted at the vital applications that Sally can handle. The technology behind Sally has major implications for prosthetics, as it can enable amputees to remotely control artificial limbs using electrodes in nearby muscles.

Apart from prosthetics, Sally can also be used for vital military and defense tasks like disarming IEDs or analyzing chemical spills, as the robot can be operated from nearly half a mile away.

Overall, there was just too much innovative and interesting technology at DSS to cover comprehensively. These were the five products that stood out for me, but I would love to hear your thoughts. What were your favorite technologies from the event?