The Current State And Outlook Of Directed Energy Weapons 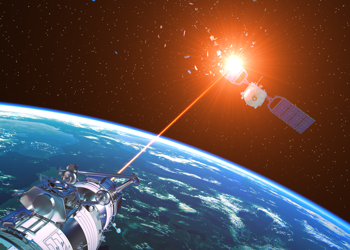 From high-energy lasers to high-power radio frequency devices and more, directed energy weapons are increasingly ubiquitous. But what are these technologies and how are they changing the way the military operates?

One of the most infamous outcomes resulting from the use of directed energy weapons (DEW) — Havana Syndrome — may or may not have happened. While the National Academies of Sciences, Engineering, and Medicine suspected the incident was caused by a foreign government’s use of pulsed electromagnetic energy and ultrasound against U.S. diplomats and intelligence officers in the Cuban capital, there is no definitive proof. In fact, the CIA concluded that the majority of the 1,000 cases of Havana Syndrome it studied were not a result of directed energy but were caused by environmental causes, undiagnosed medical conditions, or stress.

So, while the jury’s still out on Havana Syndrome, there is a lot we do know about DEW. Directed energy is an “umbrella term covering technologies that relate to the productions of a beam of concentrated electromagnetic energy or atomic or subatomic particles,” according to the Dictionary of Military Terms and Acronyms. When used “as a direct means to damage or destroy enemy equipment, facilities, and personnel,” a DEW is created.

Publicly acknowledged types of DEW that have been developed and/or used include:

All of these technologies damage targets with highly focused energy and can be applied to weapons. According to Noisecom, “Since DEW provides a unique response to rapidly emerging global threats, many industries, and military branches are channeling research and development (R&D) efforts toward directed-energy technologies poised for near-term deployment.” But for this deployment can occur, Noisecom notes, “Certain design issues must be addressed in order to achieve the high-power levels necessary to support laser-based DEW deployment in critical security operations.”

One such design issue standing in the way of producing the optical powers required for DEW is that “multiple laser modules are combined into a single beam, but the high optical intensity of each module over the fiber can generate Stimulated Brillouin Scattering (SBS) issues, which create a sizeable and destructive return loss.”

The solution? Noise generators and stand-alone noise sources that address the critical needs of SBS reduction by driving coherence spreading to minimize retroflected scattering, allowing for high optical power transmission. Coherence spreading using a random noise source reduces each laser module’s sharp waveform (peak power) by modulating the phase of the laser. Although the peak power is reduced, the average power remains the same, therefore the overall optical power of the laser is maintained while at the same time reducing the negative effects of SBS.

Other design issues in need of R&D, according to Interesting Engineering, include the need to keep the energy source within safe operating temperatures, the need for a very stable and reliable power source, and the effect of the environment on the DEW’s effectiveness and utility.

As these issues are sorted out and resolved, DEW will become an even more-valued military technology. Its uses will evolve from high-energy lasers that can zap satellites and radio frequency jammers to weapons that, over the next 40 years or so, will – according to the Office of the U.S. Air Force’s Chief Scientist for Directed Energy, Air Force Research Laboratory, for the Office of the U.S. Secretary of Defense’s Directed Energy Community of Interest  – see “flexibility of effects in the electromagnetic spectrum [relying] on operations at a variety of power levels and a variety of frequencies. Furthermore, the ability to agilely change frequencies and modes of effect are a natural extension of DEW military power which promises to enable electronic warfare at millisecond timescales.”