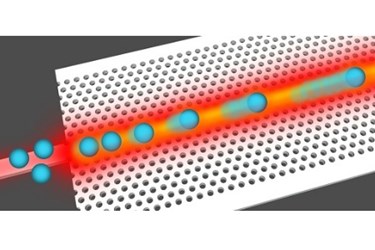 A team of researchers from the University of St Andrews and the University of York has slowed down the speed of light in a process which could have major applications in fundamental science and medical diagnosis.

The work, published in the international journal Optica, could open up more rapid methods of understanding disease or indeed the way we look at the biological world in general.

As light bends through a transparent object such as a marble, it exerts a minuscule but important force. The marble could not move as the force is too weak, but the force is sufficient to move and propel particles the size of blood cells or smaller.

Light moves at 186,000 miles per second but can be slowed down in glass, for example, by a third.

The researchers designed special nanostructures made from silicon that affect the motion of photons, called photonic crystals, to reduce the speed further.

The effect is like placing speed bumps into the light’s path, and the researchers managed to slow the light down by 95%, corresponding to a reduction by a factor 20 compared to free space.

The team then placed particles on top of the photonic crystal and used the slow light effect to actually increase the propulsion of the particles, as the slower light exerts a stronger force on the particles than would otherwise be the case.

Optical forces can allow scientists to move, collect and sort minuscule particles in the biological world, including separating abnormal from healthy cells or viruses.

The St Andrews and York team of scientists has now shown how to enhance this interaction using slow light.

Dr Scullion said: “This exciting marriage of two fields leads to new ways of moving viruses, cells and bacteria that could open up more rapid methods of understanding disease or looking at the biological world in general.”

Professor Dholakia said: “The team has performed a very exciting study that shows a new way to speed up the microscopic world, making it easier to transport fragile biological material that in turn could have major applications in fundamental science and even medical diagnosis.”

The work was supported by the UK Engineering and Physical Sciences Research Council.

Source: The University of St Andrews