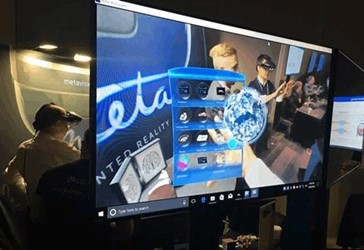 SAN FRANCISCO — It’s safe to say that, whatever the expectations happened to be for Monday’s altered reality/virtual reality headset demos at SPIE Photonics West, reality surpassed them.

As the VR, AR, MR One-Day Industry Conference packed rooms 21 and 22 next door (more on that in Photonics Online's post-show report on Feb. 12, 2018), the headset vendors and software creators crammed into room 20 rushed to answer questions, show off their wares and programming, and hand out information to eager attendees. Reservations for each company’s demo were full a week ahead of time, and late-arriving hopefuls were relegated to a “maybe I’ll get in, maybe I won’t” line that snaked out the door. Both the venue and SPIE had to bring in extra people to handle the crowd.

“We weren’t sure how willing people would be to stand in line and wait; turns out, some people are willing to wait all day,” said Gwen Weerts, SPIE’s managing editor, journals, one of those recruited to manage access to the first-time event as the crowd seeking admittance swelled.

“We’ve been using [HTC’s] hardware for about two years to do immersive virtual reality visualizations of computer software. We’re here exhibiting our multi-user technology, where you can have two individuals inside of a virtual environment collaborating, looking at very complicated software, allowing them to have a meeting of the minds toward how the software works,” said Primitive CEO John Voorhees. “We want people to have that sense that you can learn and collaborate in a 3D environment that’s boundless.”

He said the technology helps to crystallize difficult concepts, particularly for software developers. Primitive aims to create a technology that leaves its users untethered, both from their physical desks and from wires.

“You’re immersing yourself in something that would otherwise be inconceivable,” he continued. “We’ve worked a lot on making the application as user friendly as possible, so that someone can just pick up the controls and figure out how it works. It is a new format, so it’s kind of like teaching somebody how to use a mouse and keyboard for the first time. We find that people generally are pretty quick at picking it up.”

On the hardware end of things was DigiLens, whose motorcycle helmet-embedded heads-up display (MotoHUD) provided a familiar sight in a room full of the extraordinary. The helmet housing MotoHUD also integrated speakers and a microphone, all controlled by a voice-activated app. DigiLens provided the system’s pico projector and the waveguide, as well as created the app.

“We wanted to show our technology in the most compelling way possible. The great thing is, it’s transparent, so there’s no need to have any strange tint on the display” said Jacqueline Nguyen, DigiLens’ customer experience manager and marketer. “This is a true heads-up display; your head is up and straight forward the whole time. It’s focused at infinity, meaning that the time required to switch focus from the superimposed  image in front of you to the road in front of you [or vice-versa], you can’t even [perceive it].”

DigiLens recently signed an agreement with Taiwan-based Yung Optics, whom they hope can provide volume manufacturing for the company’s brand-agnostic technology.

“It can be applied to so many different use cases; it’s really up to the developer to decide how they want to integrate our technology,” Nguyen said.

Suraj Talluri, marketing coordinator for Osterhaut Design Group (ODG), was showing the company’s R9 AR Smartglasses, ODG’s  flagship prosumer developer headset. ODG touts the device as having the largest display on the market: dual 1080p resolution, along with a 50-degree-plus field of view.

“Seeing is believing on these, really. We believe our [product] has the crispest quality display,” Talluri said of the world’s only THX-certified smartglasses. “We want to know more, from the consumer’s point of view, where they stack up against the competition. Is this something they can see themselves becoming immersed in, a wearable technology they can go about in all day?”

He added that it’s important to strike a balance between that immersion and being able to orient oneself in real space, avoiding the motion sickness sometimes associated with AR/VR.

“You still have a relative understanding of where you are, which enables you to experience true immersion. The rest of your brain still can realize, ‘I’m sitting here, on my couch; I know where I am; let’s really focus here,’” Talluri said. “It leaves you at ease.”

Google, too, showed a few demos at the event, using its Daydream VR headset, which works alongside any Daydream-ready phone. Attendees were able to play either Gunship Battle 2 or Poly Runner to experience the platform’s capabilities. Google employees on-site were tight-lipped about the company’s VR/AR plans moving forward, though the company has standalone Daydream VR headsets in its product pipeline.

Additional demo participants included Microsoft, uSens, Oculus, Vuzix, and Metavision. While most vendors said they’d need some time to digest and apply attendee feedback from the event, Talluri summed up the most common response to the headset demos.

“Everyone wants them to be smaller, right?” he said.