Seeing A Photon Without Absorbing It 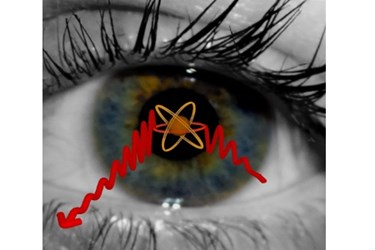 Light is of fundamental importance. It allows us to see the world around us and record pictures of our environment. It enables communication over long distances through optical fibers. All current methods of detecting light share a common property: absorption and thus destruction of a photon. It has been a long-standing dream to be able to watch individual photons fly by without absorbing them. A team of scientists in the Quantum Dynamics Division of Prof. Gerhard Rempe at the Max-Planck-Institute of Quantum Optics has now for the first time realized a device which leaves the photon untouched upon detection.

In the experiment, the incoming photon is reflected off an optical resonator containing a single atom prepared in a superposition state. The reflection changes the superposition phase which is then measured to trace the photon. The new method opens up the perspective to dramatically increase the detection efficiency of single light quanta and has important implications for all experiments where photons are used to encode and communicate quantum information.

The key elements in the experiment are a single rubidium atom and an optical cavity. The latter is a resonator for light that is made of two highly-reflecting mirrors at a very small distance. The atom is trapped at the center of the cavity, where light forces strongly confine it in all three dimensions. It exhibits two different ground states, each characterized by its specific transition energy to the next excited state. To test the detector, the cavity is irradiated with a series of very faint lasers pulses that contain on average much less than a single photon.

In one of its ground states, the atom is off-resonant with both, the cavity and an impinging photon. In this case, the photon will enter the cavity, but not interact with the atom. Because of the special properties of the cavity, the photon will leave it on the same path it entered. In the other ground state, the atom is resonant with both, the cavity and the impinging photon. In this case, atom and cavity represent a strongly coupled system with properties distinctively different from those of the individual systems.  In contrast to the first case, a photon, which is on resonance with the cavity, has no chance to get into it. Instead, it is reflected from the first mirror. In either case, the fragile light quantum is reflected rather than absorbed and destroyed.

"However, the photon has left its trace in the atom," Andreas Reiserer, doctoral student on the experiment and first author of the publication, explains. "The trick is that we prepare the atom in a superposition of the two ground states. The very moment the photon is reflected from the cavity, the resonant state experiences a phase shift relative to the off-resonant one. This phase shift can then be read out from the atom.  In this way, the photon has survived its detection with its properties, for example its pulse shape or polarization, untouched."

The phase shift of the atomic state is detected using a well-known technique: "Loosely speaking, the atom lights up when probed after reflection of a photon," says Dr. Stephan Ritter, scientist at the experiment. In order to prove that the nondestructive detection works, the reflected photons are also registered by conventional photodetectors. "In this way, we detect the photon twice, which is impossible with destructive detectors alone. In our proof-of-principle experiment we have achieved a single-photon detection efficiency of 74 %, which is already more than the 60% of typical destructive detectors." Ritter says. "The achieved value is not fundamentally limited, but due to some imperfections that we can work on in the future."

The ability to observe single photons without destroying them or changing any of their degrees of freedom opens the perspective for a number of new experiments. A single photon can be detected repeatedly by combining several nondestructive devices. This also provides new possibilities for using single photons in quantum communication and quantum information processing. The successful transfer of a photon in a quantum network could be detected without destroying the fragile quantum information encoded in it. Based on the mechanism used for single-photon detection, it should also be possible to realize a deterministic, universal quantum gate between a reflected single photon and the single atom and even between two photons. Because quantum gates are the functional building blocks of a quantum computer, this is a long-standing dream in optical quantum computing.