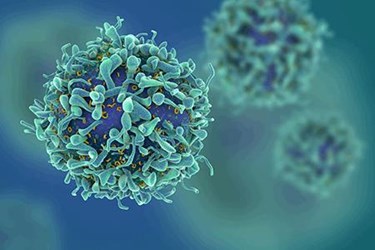 Scientists at the Hebrew University of Jerusalem have successfully demonstrated a fully-integrated nanoscale photonic device that can analyze a single fluorescent bacterial cell. Such a unique system could result in the creation of on-chip sensors with the capability of analyzing cells and chemicals in real-time.

Touted as ultra-compact, handheld biosensors of the future, experimental nanoscale plasmonic devices use biological fluorescence to detect chemicals and to diagnose diseases. These devices, however, depend on off-chip detection, external coherent light sources, and a cumbersome apparatus to analyze samples, including single cells.

In order to integrate components into a true lab-on-a-chip device, a research team at the Hebrew University of Jerusalem combined all essential parts, including light sources and detectors, on a single chip, at nanoscale dimensions.

For their study, they utilized a nanoscale plasmonic V-groove waveguide to interrogate an individual Escherichia coli cell, which emits a fluorescent signal. Three configurations were tested:

First, they measured the light emitted from the cell in a liquid environment as it flowed on top of the nanocoupler, through which the obtained fluorescence is allowed to be coupled directly into the waveguide.

The second and third conditions involved positioning the bacterium within the nanoscale waveguide as it was excited by laser in a dry environment, directly either from the top, or through the nanocoupler. In addition to its purpose of guiding light, the waveguide, through its V-grooves, acted as an effective tool for mechanically trapping the bacteria.

Using aluminum, instead of silver or gold as in typical plasmonic waveguides, also proved crucial in guiding the obtained fluorescent light from the bacterial cell into the output nanocoupler.

Data from the experiments were supported by a follow-up set of numerical simulations.

"The results provide a clear indication of the feasibility of constructing a hybrid bioplasmonic system using live cells. Future work will include the construction of waveguide network, diversifying the system to incorporate different types of bacterial sensors for the detection of various biological or chemical analytes," said the researchers.

The study, led by Prof. Uriel Levy, Director of The Harvey M. Krueger Family Center for Nanoscience and Nanotechnology at the Hebrew University, was published online in Nano Letters.