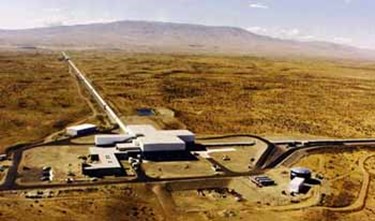 David Reitze, executive director of the Laser Interferometer Gravitational-Wave Observatory (LIGO), delivered a historic “We did it!” to announce the first ever confirmed detection of gravitational waves, and we began our story of studying the universe like never before. As said by Gabriela González, LIGO Scientific Committee spokesperson, “This detection is the beginning of a new era: The field of gravitational wave astronomy is now a reality.”

With a 24:1 signal to noise ratio, the most stable optical system ever built measured a gravitational wave's low frequency effect through distance changes of about 10-18 m, or about 1/1,000 the diameter of a proton.

Both of LIGO’s identical facilities detected the famous chirp (Fig. 1), rising in frequency from 35 to 250 Hz, as the gravitational wave ripple made its way through each of the runway-sized interferometers. The sister observatories, located in Hanford, WA (data shown in orange) and Livingston, LA (data shown in blue), measured the same wave with the 7 ms delay one would expect from light-speed propagation.

LIGO’s detection of two colliding black holes certainly provides valuable astrophysical insight, in addition to the physics implications of proving Einstein right…again. But before venturing too far into this new era, let me tell you more about these specific, 40 kg mirrors and how they detected the collision of two black holes 1.3 billion light years away.

This is more of the detector’s origin story: the incredible concert of optical and photonic devices required to make the largest interferometer in the world.

The elegance of this particular interferometer comes from the complexity beneath the surface of what is, conceptually, a simple measurement. For those unfamiliar, the simplest Michelson interferometer consists of a laser, a beam splitter, and two mirrors. The mirrors are placed at right angles to form equidistant paths, down and back, for each of the split beams. Changes in the beam path of one arm relative to the other, from say, a passing gravitational wave, affect the interference in the recombined waveforms. For public discussions, this is exactly how LIGO is depicted:

LIGO modified the original configuration somewhat to add many orders of magnitude to the sensitivity of Albert A. Michelson’s original 1881 experiment. The nature of the measurement, however, is the same. LIGO’s hefty end mirrors (Fig. 2) serve as the test masses whose motion from passing gravitational waves manifests as interference.

About half as old as the first laser, the LIGO project has inherently had to ride the edge of optical technologies since its 1984 founding. David Reitze says, “LIGO is […] a hairy edge project in the sense that most of what is inside the advanced LIGO detector is cutting edge and had to be developed.”

“The best examples are the mirrors,” says Reitze. “The mirrors in Advanced LIGO [Fig. 2] are better than the mirrors we used in Initial LIGO, which were, at the time […] in terms of surface figure, among the best figured mirrors in the world.”

Initial LIGO, or iLIGO, refers to the first LIGO interferometers, which operated for nine years and achieved their expected sensitivity, but never detected gravitational wave oscillations. In fact, it was unlikely that they could have.

Much like CERN required decades of discovery to become feasible, LIGO’s systems have demanded cutting-edge solutions for optimizing every aspect of its detection. From its earliest plans, the second and more advanced version of LIGO (aLIGO) was designed to have the sensitivity needed to make the first gravity wave measurement; iLIGO was the successful proof that such a detector could be built and operated at all.

But the name of the optimization game for LIGO is noise — the two vital numbers related to (any) measurement are signal and noise. Signal amplitudes, even from an unprecedentedly energetic event in the cosmos, would be easily lost in a variety of common noises, were those noises unaccounted for. Essentially, every feature of the LIGO interferometers is designed to discriminate and eliminate — or minimize as much as possible — noise of some kind.

LIGO's mirrors tout the best figures in the world by necessity, designed to require the absolute minimum noise correction. Made of ultra high-purity fused silica, the mirrors’ 32 in. diameter provides serious challenges for coating and continues to push the limits of material science.

Only a few companies in the world can even entertain the idea of coating such large mirrors with the titania-doped tantala and silica developed for LIGO. With a 0.16 nm RMS roughness, scattering from these mirrors is reduced to an impressive 10 scattered photons per every 1 million.

To take full advantage of the mirror’s thermal noise figures, a quadruple pendulum system suspends each test mass and is actively isolated from seismic noise. Also, each 4 km arm housing these systems is in ultra-high vacuum. (Perhaps the folks racing to develop the hyperloop would be interested in this aspect.)

Collectively, these methods provided 12 orders of magnitude of ground (mechanical) noise isolation to signals above 10 Hz.

As for the lasers...

"The lasers are the most stable lasers in the world […] and that takes a lot of engineering,” says Reitze. “The laser not only has to be ultra stable in terms of frequency, and amplitude, and spatial mode, but it also has to operate day in and day out."

In addition to the main laser, five different types of lasers are also incorporated, in a variety of ways, to provide much of the calibration and stability, both active and passive, needed for a measurement competing with quantum noise. (More often than not, the solution to laser-based problems is actually more lasers.)

Certain thermal effects on the mirror surface (what little remain, anyhow) are corrected with (re-)radiation from CO2 laser-heated compensation plates. The cavity in each interferometer arm is phase locked independently to auxiliary, frequency doubled lasers. The precise motion of the 40 kg test masses are photon calibrated, using the radiation pressure of an acoustically modulated laser to accelerate the mirror.

And, let’s not forget, LIGO has two interferometers. Two architecturally identical facilities were built on opposite sides of the U.S. to provide uncorrelated physical environments, as well as a sizable time delay between detection signals that confirms a gravity wave's speed of light velocity. LIGO relies on coincidence methods to be able to discriminate against certain types of transient noise.

Building two interferometers provided a unique advantage that is rarely an option for such large experiments. According to Reitze, when they were building the two systems they hopscotched progress, in a sense. “One interferometer would work on one problem, and then once it got solved, hand the solution off to the [other] interferometer […] and vice-versa,” said Reitze.

All of those solutions and cutting edge developments led to a gravitational wave observatory operating just in time to pick up the after effects of two black holes merging into one, 1.3 billion light years away. The sub-nuclear sized motions of LIGO’s mirrors brought an end to this decades-long quest for that first signal, and a beginning to a new era of measuring the universe.

Julia H. Majors is a technical writer and science communication consultant. In 2015, she received her Ph.D. in physics from U.C. Irvine, where she studied plasmonics and their application to ultrafast, single-molecule spectroscopy. Julia has worked with organizations such as Newport Corporation and SPIE to create a variety of photonics based publications. She is also currently a member of the OSA Public Policy Committee.