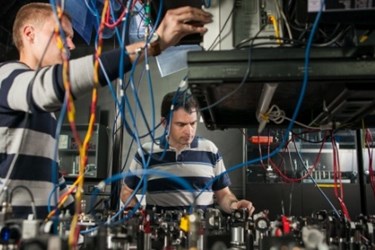 Scientists from the Russian Quantum Center (Moscow), lead by Prof. Alexander Lvovsky, have developed a method to restore quantum entanglement and have tested this method in an experiment. This research significantly broadens the possibilities of quantum communication and quantum cryptography.

The results are published in prestigious scientific journal Nature Photonics.

The phenomenon of quantum entanglement (or quantum correlation), in which the states of two or more objects - atoms, photons, ions - are linked, is the basis of modern quantum technology. This phenomenon plays a particularly important role in secure quantum communication systems - these systems completely eliminate the possibility of undetected "wiretapping".

However, entangled states are very fragile, they break easily during transmission due to noise or optical losses. In addition, the very creation of entanglement is quite a difficult process, it requires complex experimental setups. Therefore, the possibility of transmission of quantum information is very limited - existing equipment is only capable of transferring data at a distance of no more than 100 kilometers. Many research groups are now looking for ways to increase this limited distance – otherwise, possible practical applications of quantum technologies are extremely limited.

Lvovsky’s group in the Quantum Optics Laboratory at the Russian Quantum Center conducted a series of experiments in which they managed to restore the level of quantum correlation between pulses of light in two optical channels, which was almost completely destroyed after passing through a 20x optical losses. This corresponds to the level of loss in 65 kilometers of ordinary fiber optic cable.

A nonlinear crystal of periodically poled potassium titanyl phosphate was used as the source of entangled photons in the experiment. Picosecond pulses of light generated by a titanium-sapphire laser were "fired" at the crystal.

As a result, entangled photon pairs were produced in the crystal and directed into two different optical channels. In one of them, the light was subjected to 20-fold attenuation using darkened glass, causing the level of entanglement to fall almost to zero. Then a special amplification procedure was applied, restoring the quantum properties of light in the channel to levels close to those that occurred before the loss.

This procedure is to mix the light pulse in the channel with a single "auxiliary" photon in a beam splitter (a partially transparent mirror). A single photon detector is placed at one of the outputs of the beam splitter.

If the detector "clicks", this means that the photon has entered into the beam splitter and left. It would seem that the state of the second pulse to enter the beam splitter (a part of the entangled state) should not change. But, because of paradoxical properties of quantum interference, the state changes in towards the "strengthening" of its quantum properties.

This phenomenon, discovered by Lvovsky and colleagues in 2002, has been named quantum catalysis, because the "auxiliary" photon, like a chemical catalyst, is not itself involved in the reaction, but changes the state of light in the other channel.

"At that time it seemed no more than a curious phenomenon, of which there are plenty in quantum physics. Now it turns out to be of great practical use - it allows one to restore entanglement of quantum light," says Lvovsky.

According to him, this work is a step towards building a quantum repeater - a device capable of reducing the loss of quantum information over fiber optic connections. In the future, this will create a global system of transmission of quantum information, and will overcome constraints on quantum cryptography. 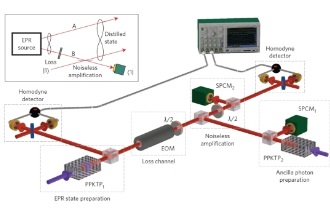 "Of course there is a price for the restoration of entanglement - out of one million weakly entangled pairs of photons there is one highly entangled one. But in this regard the level of correlation is restored to the original, and while the data transmission rate is somewhat reduced, we can get a stable connection at a much greater distance," said study co-author Alexander Ulanov.

While publications of Russian scientists in prestigious international journals, in particular, Nature Publishing Group, are not uncommon, in most cases, these articles are about theoretical research or experiments conducted in foreign scientific centers.

This study is unique in that the experiment itself, as well as the data processing, was carried out at the Russian Quantum Center. "The publication of this article shows that the RQC has an environment for scientific research of the highest league," said CEO of the RQC Ruslan Yunusov.