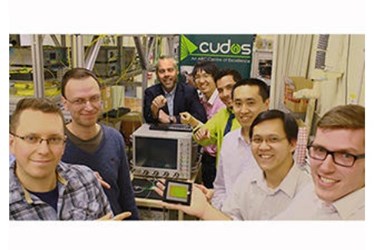 A breakthrough in photonics that will help to create extremely compact optical chips, a hair's width in size, and deliver a photon at a time, has been achieved by researchers from the University of Sydney.

"This result has applications in the development of complex quantum technologies, including completely secure communications, quantum measurement, the simulation of biological and chemical systems and, of course, quantum computing," said Dr Alex Clark, leader of the research team from the Australian Research Council Centre of Excellence for Ultrahigh Bandwidth Devices for Optical Systems (CUDOS).

Carried out at the University of Sydney's School of Physics, the research is published in Nature Communications October 11, 2013.

Photons are single particles of light that can readily carry quantum information. The importance of being able to develop a chip that can deliver one photon at a time at very high rates is to provide scalability for the extraordinary diversity of quantum technologies that could enhance computing and communication infrastructure.

Scalability refers to the ability to use many photon sources in parallel to carry out complicated tasks.

"It is easy for us to generate photons at high rates, but it's much harder to ensure they come out one by one because photons are gregarious by nature and love to bunch together," said lead author of the Nature Communications article Matthew Collins, a PhD student from CUDOS at the University of Sydney.

"For that reason the quantum science community has been waiting over a decade for a compact optical chip that delivers exactly one photon at a time at very high rates."

In fact, the creation of a single photon in an optical circuit has been possible for some years, but previous demonstrations have been difficult to implement and scale up or have been excessively noisy. This has limited the single photon technology to being either very slow or having a high probability of error.

"We've shown how multiple imperfect sources of photons on a single chip can be combined to produce a much higher quality source," said Dr Clark.

The photons here are generated from a pulsed laser. "A key breakthrough for this research was the CUDOS development of photonic chips that slow light," said Professor Ben Eggleton, CUDOS Director and co-author of the research. "This makes single photon generation more likely, reducing energy demands and allowing extremely compact devices with lengths no longer than 200 microns, the width of a human hair."

The next step is to integrate all the components of this scheme onto a single chip so that an on-demand 'push button' single photon source can be deployed in future photonic quantum technologies.

"This result presents a major milestone for the Centre and for the field. We are especially pleased with the successful collaboration between CUDOS and DSTO," said Professor Eggleton.

Dr Alexander Zelinsky, Chief Defence Scientist and head of the Defence Science and Technology Organisation, acknowledged the importance of collaboration with the University of Sydney and the CUDOS program. "Australia's research in photonic devices is world leading, and we are delighted to collaborate in the area of quantum photonics, which promises revolutionary quantum devices for secure communications".

In the first event of its kind for an ARC Centre of Excellence, CUDOS will be showcasing its research and technology to the community on 22 November at the Australian Technology Park.