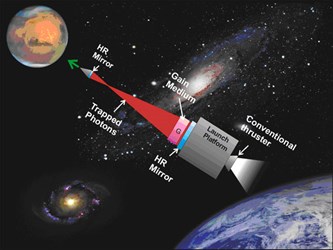 Fuel-based propellants leave much to be desired when it comes to moving objects through outer space, whether you're repositioning a satellite, delivering supplies to a space station, or transporting astronauts to the Moon. For one, rocket fuel is really expensive. It's also an inefficient fuel source. It's not particularly safe — for passengers or the environment. It's in limited supply. It takes up precious space on a spacecraft and adds mass. And perhaps most importantly, it can only take you so far, so fast.

To overcome these limitations, scientists are exploring alternative methods of propulsion, and a compelling approach comes from the field of photonics: laser propulsion. Research into the technique dates back to the late 1960s, but its progress has been gradual until recently. With the recent development of high-power lasers and optics, laser propulsion technology is starting to mature more quickly and garner more serious attention in the astronautical engineering community.

One organization paying very close attention to the development of laser-based propulsion technology is NASA. Earlier this month, the space agency pumped a second infusion of cash into the research of Dr. Young K. Bae, a physicist with 25 years' experience in advanced propulsion concepts (including antimatter and fusion propulsion) at SRI International, Brookhaven National Laboratory, the Air Force Research Laboratory, and most recently the company he founded, Y. K. Bae Corp. The $500,000 award, issued under NASA’s Innovative Advanced Concepts (NIAC) program, will support further development of Bae’s patented Photonic Laser Thruster (PLT) technology, which the inventor believes will one day transport humans to other solar systems.

How The Photonic Laser Thruster (PLT) Works
PLT represents a fundamental departure from traditional space vehicle architecture, and not just on the basis of its fuel source. In conventional spaceflight, the propulsion system and power source are located on the craft itself, in an “all-in-one” single-vehicle system. PLT, on the other hand, involves a pair of spacecraft: one that will carry payload/personnel through space, and a comparatively stationary propulsion system that will beam photons at the other craft, effectively pushing it where it needs to go.

However, beaming photons from one craft to another is an inefficient way to propel a vehicle, since photons have zero mass and no electric charge. Bae overcame this problem by placing high-reflectance mirrors on each of the two paired spacecraft in PLT, forming an active resonant optical cavity between them. By bouncing photons back and forth between the mirrors thousands of times, the PLT method amplifies photon thrust by orders of magnitude. In fact, Bae and his team have used this “photon recycling” to achieve an amplification thrust factor of 3,000 in the lab, using off-the-shelf optical components and a YAG gain medium. (The demonstration was performed under the auspices a previous NIAC grant.) Bae believes that PLT can ultimately generate thrust-to-power ratios approaching those of conventional thrusters (such as laser ablation thrusters and electrical thrusters), but with a much higher efficiency, enabling it to achieve faster speeds or carry additional cargo.

Bae is also investigating the use of PLT in Photon Tether Formation Flight (PTFF), wherein photons are bounced off mirrors between satellites or spacecraft to achieve nanometer-scale control.

The potential benefits of PLT technology are numerous:

Photonic Spacetrains And The Future Of Space Travel
The recent NASA/NIAC award will help fund two years of R&D into PLT technology, with an end-goal of demonstrating PLT propulsion using space-qualified lasers in a vacuum environment. But looking further into the future, Bae has much bigger plans for PLT.

In a paper presented at the 2012 Space, Propulsion & Energy Sciences International Forum, Bae shared his predictions for the future of PLT-enabled spaceflight, beginning with near-Earth orbit (NEO) maneuvering and culminating in interstellar travel. At the core of Bae’s vision is the establishment of a photonic railway, where permanent reusable earth- and space-based structures propel spacetrains everywhere from the Moon to distant stars (and back). It’s pretty heady stuff, and worth a quick look at Bae’s proposed development pathway.

Phase 1 – Satellite And NEO Manipulation: During the first phase, predicted to occur over the next 5 to 30 years, PLT technology will continue to mature, increasing in power/thrust and operating distance. Thrusts will achieve a range of 1 millinewton (mN) to 1 kilonewton (kN), assuming the development of solar power systems capable of providing up to 100 MW of power. In such a system, the diffraction-limited size of the beaming mirror/lens would be on the order of 100 m, and the spacecraft mirror would be 2.44 m. Operating distance is projected to be up to 100,000 km. PLT technology would be used more for near-Earth maneuvering and positioning (replacing fuel-based thrusters) during this phase than for long-distance travel. Sample applications include positioning of space telescope, space radar, solar power beaming, and surveillance satellite arrays, and for maneuvering around space stations.

Phase 2 – Interlunar Photonic Railway: Over the next 30 to 50 years, Bae predicts PLT thrust will reach 1 to 100 kN (requiring operating power of 100 MW to 10 GW) and operating distance will be up to 1 million km — more than sufficient to establish a photonic railway between the Earth and the Moon. PLTs would be used both to accelerate a spacetrain toward its destination, and slow it down upon arrival (about 14 hours later, by Bae’s estimate). Diffraction-limited size of the beaming lens would be approximately 200 m, and the spacecraft mirror 50 m in diameter, though potential reductions in laser wavelengths could enable a proportional decrease in lens and mirror size. Applications could include lunar mining and permanent habitation.

Phase 3 – Interplanetary Photonic Railway: Gazing out 50 to 70 years in the future, Bae sees PLT thrust scaling to the 100 kN to 10 meganewton (MN) range (10 GW to 1 TW operating power) and operation distance to 1 billion km, or roughly the distance from Earth to Pluto. Using 1 μm lasers, the trip from Earth to Mars (225 million km) would require a diffraction-limited beaming lens diameter of 2.5 km and a spacecraft mirror diameter of 220 m; the trip from Earth to Pluto, 35 km and 500 m, respectively. The anticipated development of a high-power laser with a 1,000x reduction in wavelength would drop lens/mirror diameters by a factor of 32 (i.e. 1 km and 16 m, respectively, for the Pluto trip). Trip time from Earth to Mars could take anywhere from a few days to two months, depending on the progress of supporting technologies. Potential applications for such travel include mining and permanent habitation on other planets and asteroids, and eventually terraforming and colonizing Mars.

Phase 4 – Interstellar Photonic Railway: Bae’s ultimate goal is for PLT to enable manned roundtrip interstellar flight in one human generation. Within a 70-to-100-year timeframe, he thinks the technology should be capable of delivering >10 MN thrusts (1 to 100 TW operating power) and operating distances of up to 100 trillion km. As an example, he says PLT could handle the 10.5-light-year (100 trillion km) trip from Earth to Epsilon Eridani, with diameters of 1,000 km for the beaming lens and 252 km for the spacecraft, with 1 Μm lasers.

What Could Derail The Plan?
Bae acknowledges that there are many “daunting” challenges that must be overcome for his photonic railway dream to become a reality. On the technical side, aligning optics over astronomically long resonant optical cavities will be extremely difficult — current technology can provide the necessary accuracy for distances up to interplanetary, but not for interstellar missions, which would require angular aiming precision of <10-14 rad. As I mentioned earlier, the future development of smaller-wavelength lasers is also required to achieve the projected operating distances of the railway. And the power requirements of all but the Phase 1 systems are far beyond current capabilities.

Then there is the financial challenge. In Bae’s opinion, funding for the photonic railway would require “unprecedentedly large world-scale investment.” Unless the program demonstrates the potential for enormous returns, it will fail to garner the necessary ongoing investment required to develop the foundational technology for each phase. Plus, Bay points out, few projects in human history have spanned the time expected to build out the interstellar photonic railway — only the Egyptian pyramids and the Great Wall of China.

Nevertheless, Bae remains optimistic. He foresees the development of a 1 keV x-ray laser to meet the power requirements, of advances in space telescope metrology to achieve the necessary aiming accuracy, of solar power systems to deliver 12 TW of photon power by 2100. And he thinks the promise of space solar power, exotic ore mining, exploration, colonization, and other benefits will be enough to drive economic interest through each phase of the railway’s development. NASA’s $500,000 investment in the laser propulsion technology is but the first of many.

Will the interstellar photonic railway even make it out of the station? Please share your thoughts on this technology in the Comments section below.