Paving The Way For A Faster Quantum Computer 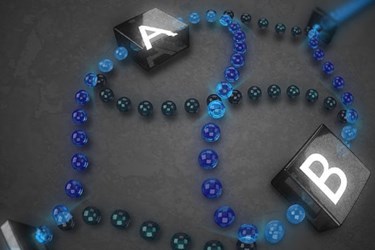 A team of physicists from the University of Vienna and the Austrian Academy of Sciences have demonstrated a new quantum computation scheme in which operations occur without a well-defined order. The researchers led by Philip Walther and Caslav Brukner used this effect to accomplish a task more efficiently than a standard quantum computer. Moreover, these ideas could set the basis for a new form of quantum computing, potentially providing quantum computers with an even larger computational speed-up. Their results will be published in an upcoming issue of "Nature Communications".

Since its conception, quantum mechanics has defied our natural way of thinking, and it has forced physicists to come to grips with peculiar ideas. Although they may be difficult to digest, quantum phenomena are real. What’s more, in the last decades, scientists have shown that these bizarre quantum effects can be used for many astonishingly powerful applications: from ultra-secure communication to hacking existing secure communications, and from simulating complex quantum systems to efficiently solving large systems of equations.

One of the most exciting and most difficult proposed quantum technologies is the quantum computer. Quantum logic gates are the basic building blocks of a quantum computer, but constructing enough of them to perform a useful computation is difficult. In the usual approach to quantum computing, quantum gates are applied in a specific order, one gate before another. But it was recently realized that quantum mechanics permits one to "superimpose quantum gates". If engineered correctly, this means that a set of quantum gates can act in all possible orders at the same time. Surprisingly, this effect can be used to reduce the total number of gates required for certain quantum computations.

All orders at once
A team led by Philip Walther recently realized that superimposing the order of quantum gates, an idea which was theoretically designed by the group of Caslav Brukner, could be implemented in the laboratory. In a superposition of quantum gate orders, it is impossible – even in principle – to know if one operation occurred before another operation, or the other way around. This means that two quantum logic gates A and B can be applied in both orders at the same time. In other words, gate A acts before B and B acts before A. The physicists from Philip Walther’s group designed an experiment in which the two quantum logic gates were applied to single photons in both orders.

The results of their experiment confirm that it is impossible to determine which gate acted first – but the experiment was not simply a curiosity. "In fact, we were able to run a quantum algorithm to characterize the gates more efficiently than any previously known algorithm," says Lorenzo Procopio, lead author of the study. From a single measurement on the photon, they probed a specific property of the two quantum gates thereby confirming that the gates were applied in both orders at once. As more gates are added to the task, the new method becomes even more efficient compared to previous techniques.

The Way Forward
This is the first time that a superposition of quantum gates has been implemented in the lab. At the same time, it was used to successfully demonstrate a new kind of quantum computing. The scientists were able to accomplish a computation with an efficiency that cannot be achieved within the old scheme of quantum computing. This work opens a door for future studies on novel types of quantum computation. Although its full implications are still unknown, this work represents a new, exciting way to connect theoretical research on the foundations of physics to experimental quantum computing.