Optics & Photonics Needs Workers — But How Do We Find, And Keep, Them? 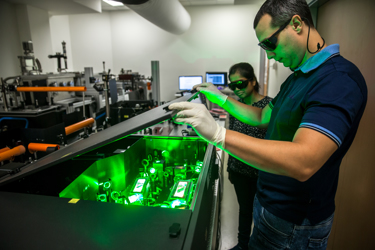 As we anticipate the next spate of high-vis tech companies reducing their workforce to hit the news cycle, there sits an outlier to the trend. Optics and photonics companies have yet to face the fate of other technology sectors, and it seems their resiliency amidst rising inflation and potential recession isn’t waning.

Over the past several weeks and months, I’ve heard over and over again the strength of the industries — with mergers and acquisitions, product line and market expansions, and larger production footprints. Much of that growth has been attributed to the boon in health sciences and defense spending with the onset of the coronavirus pandemic and the Russia-Ukraine war. However, a developing workforce is much-needed component to support the growth. And again, I’ve heard another refrain: hiring and retaining skilled workers is a challenge.

The challenge is not unique to optics and photonics, of course. But with a multipronged approach, leaders across the field are employing a variety of efforts to engage and inspire early learners, develop desirable company cultures, and nurture the careers of existing employees.

Increasing The Visibility Of Optics & Photonics

SPIE has perhaps one of the clearest views of the optics and photonics workforce, having over 250,000 constituents across the globe and organizing more than 25 industry-leading conferences and forums. SPIE Senior Manager of Communications and Web Marketing Kevin Probasco knows too well the concerns of many hiring managers. Probasco has heard from member companies that an aging workforce and engineering students choosing other specialties are the prime causes for staffing issues among engineering roles. And sometimes, especially for U.S.-based companies involved in the defense sector, it’s challenging to find engineers with security clearance.

“My guess is that as the optics and photonics industry matures, and more applications commercialize the product, the workforce shortage is going to increase,” said Probasco.

While he isn’t sure if companies serving certain markets are faring better or worse than others, Probasco believes companies comprising photonics and optics clusters, such as those in and around Bozeman, Montana, and Rochester, New York, and hubs in California, Florida, and New England, have an upper hand at hiring.

“The Montana cluster has been very successful in getting partnerships between the universities and state funding... And they've had a lot of success in raising the awareness of the optics community in Bozeman in particular.”

And that’s what it comes down to for Probasco.

“One of the biggest problems from my perspective is that people don't know what optics and photonics is, so it's kind of a hidden technology in everything we have today. So it's important for everyone to do their part, talking about the work they do and telling people what optics and photonics is to try to increase the awareness of its impact and the opportunities that it has as an industry for jobs.”

For its part, SPIE has countless resources — from its career lab and annual salary reports to digital library and conferences and exhibitions. But Probasco is beginning to hear separate concerns from companies looking for qualified optical, laser, and fiber optic technicians. Recently, the society has invested into a repository of optical technician resources, including a comprehensive list of community colleges and their two-year degree programs in lasers, optics, and photonics; the Eichenholz-SPIE Photonics Technician Scholarship; an expansive curriculum created by The National Center for Optics and Photonics Education, OP-TEC; and the inclusion of technician roles in its annual salary report. Reaching out to the technician crowd is somewhat a new endeavor for SPIE, as it primarily focuses on the needs of its membership, which are typically engineers.

Optician Matthew Halpern knows firsthand the experience of being a newcomer to the industry, noting it doesn’t have high public visibility. Halpern graduated with a liberal arts degree from Duchess Community College and began his career in optics only after his mother saw a hiring notice for Spectral Systems, which happens to be located within a New England photonics cluster.

“After a tour of the facility at Spectral Systems, I was completely fascinated by everything I saw. I then had to go through a temp agency, and six months later I was hired. A year later, I was offered a promotion position at the site in New Hampshire. I moved there within the month, and it’s been an awesome journey so far.”

Having come from outside the industry, Halpern sees a few ways in which the workforce can be strengthened. For one, he recommends companies consider candidates with passion, not necessarily the formal education.

“I was lucky enough to find a teacher who wanted to ‘pass the torch’ so to speak, and I’m learning more and more every day that each new order we take on requires different ‘tips and tricks’ to get it done correctly.”

He’d also like to see more collaboration between designers and opticians.

“What seems good on paper isn’t necessarily what is practical to do in real life. The more symbiotic their relationship is, the faster the orders will get finished,” said Halpern.

But what’s maybe the most intriguing part to Halpern’s journey on becoming a master optician is the strikingly different way he regards his developing skillset. Halpern’s passion for polishing and grinding has led his to share that love on social media. He actively posts before-and-after videos to his Instagram account, where he’s developed a following. The videos give viewers a glimpse into Halpern’s every day and include professional insights for those curious about the craft. Also tapping into social media streaming video is Edmund Optics Technical Marketing Manager Cory Boone.

From wanting to produce STEM videos for his own Bill Nye-esque account to amassing more 28,000 followers for EO, Boone has harnessed platforms like TikTok and LinkedIn to reach previously untapped audiences.

Boone has found TikTok videos are popular with non-engineers, even families, and a recent video of his even more than 1 million views. Reposted on LinkedIn, his same videos get a “second wind” with a more targeted audience of young (and even veteran) engineers.

Boone saw TikTok as a channel for educational outreach — to inspire early learners to go into optics and photonics —  thus “planting the seeds” of new engineers to enter the workforce a decade from now. Edmund Optics does the same through in-person educational outreach, conducting elementary school visits and visiting college campuses to recruit engineers for their internship program.

But what’s particularly important to Boone personally and to the retention of high-caliber employees is career opportunity and company culture.

“Salary wars only go so far… Salaries are great. We like making money to do all of the things we want to do outside of work, but also showing people career paths and the opportunity to rise up is really big,” he explained. EO offers a rotation-based engineering leadership program that allows new grads to develop diverse skills and gain exposure to different departments.

Company culture, whatever form that may take, he added, is also important. For many incoming engineers, there’s greater attention paid to work-life balance, opportunities for social interaction, and health and wellness benefits.