Optical Transistors: The Next Step In Quantum Computing? 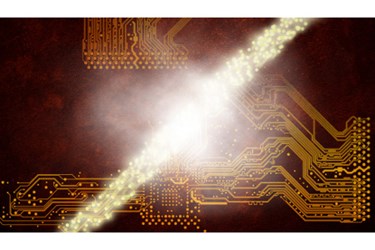 The world’s appetite for computing power is nearly insatiable, expecting microprocessors to handle ever-larger and more complex calculations quickly and efficiently. Until recently, the go-to method for achieving ongoing performance improvements was to continuously shrink the size of transistors, so you could keep cramming more of them onto each microprocessor chip. Generally speaking, the higher your transistor count, the greater the computing performance of your integrated circuit (IC).

However, we appear to be reaching the practical limits of Moore’s Law, which states that the number of transistors you can get onto an IC — largely due to reductions in transistor size — doubles approximately every two years. It’s going to be tough to make conventional electron-based transistors much smaller than they are now (though some are trying), and managing the corresponding heat generated by so many transistors packed into such a tight space is a major challenge.

An optical solution to the problem may be close(r) at hand, according to findings published by two different research groups in recent weeks. Teams at the Massachusetts Institute of Technology (MIT) Research Laboratory of Electronics and the Institute of Solid State Physics at the Vienna University of Technology (UT Vienna) are claiming novel breakthroughs in the development of optical transistors, which use light (photons) rather than electricity (electrons) to carry information. Theoretically, such optical transistors could improve heat/power management and processing speeds in conventional computers, and even facilitate the development of more effective quantum computers — the holy grail of computing.

Rotating Beams Of Light — More Efficiently
Back in 2011, a UT Vienna research team led by Professor Andrei Pimenov published results of an experiment demonstrating the Faraday effect — rotating the polarization plane of a beam of light — on a massive scale. The researchers effectively tuned a light beam’s polarization by applying a magnetic field to ultra-thin layers of mercury telluride as the beam (terahertz radiation, to be precise) passed through it. Used in conjunction with a polarization filter, which allows only light polarized at a particular angle to pass, this “light transistor” could thus control whether a beam would pass or be blocked, much like a traditional transistor would manage electron flow. 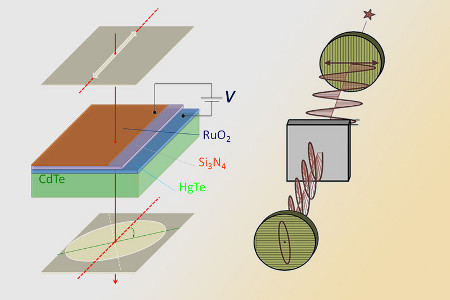 Unfortunately, this initial approach was less than efficient, requiring an external magnetic coil and very large electrical currents to generate the necessary magnetic field. In the results published earlier this month, however, Pimenov’s team showed it could overcome this problem by rotating the polarization using electrical potential, or the volume of electrons involved, rather than the strength of the magnetic field. As a result, the new optical transistor can be controlled using a permanent magnet and an electrical potential of less than one volt.

Creating A Single-Photon Optical Switch
The MIT group’s approach involved setting a pair of highly reflective mirrors a precise distance from one other, and filling the space in between them with supercooled cesium gas. In its “on” position, the optical switch allows light of a certain wavelength to pass through both the mirrors and the gas. But by throwing it into the “off” position — by firing a single “gate” photon into the gas, exciting one electron of one cesium atom into a higher energy state  — only about 20% of the light is able to get through.

The MIT findings could help eventually address the transistor overheating issue in conventional microprocessors, at least in theory, because the single-photon approach is more energy efficient than the current electrical one.  “One could imagine implementing a similar device in solid state — example, using impurity atoms inside an optical fiber or piece of a solid,” Vladan Vuletic, lead investigator and Lester Wolfe Professor of Physics at MIT. (The work was carried out in partnership with researchers from Harvard University and, of all places, UT Vienna.)

What really has technologists interested, though, is the potential application for the MIT optical transistor in quantum computing, particularly the issue of superposition. This concept ties my brain in a bit of a knot, but the gist is that where memory in classical computers is made up of bits, which must be in one of two states (for instance, 0 and 1) at any given time, in quantum computers it’s composed of a series of qbits, which can exist in both states simultaneously. Please don’t ask me to explain any further, but suffice it to say that photons are easier to keep in superposition than alternative particles being explored for qbits, like laser-trapped ions.

Coming Soon To A Computer Near You?
These two recent examples are far from the first demonstrated optical transistor concepts, and research into the technology is being conducted at McGill University, Purdue University,  the Max Planck Institute, and elsewhere. Plus, both approaches are a long way from practical use — they are still comparatively large in scale and have rather particular operating requirements. (Sheets of mercury telluride and supercooled cesium gas aren’t exactly easy to come by.) So while these accomplishments may represent significant steps toward new computing techniques, don’t expect either to unseat the good old electrical transistor any time soon.