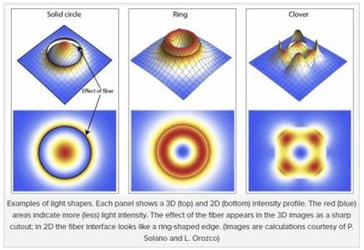 Researchers at the University of Maryland's Joint Quantum Institute (JQI) and the Army Research Laboratory (ARL) have devised a unique method to measure the radius of a nanofiber with sub-angstrom-scale sensitivity — without destroying the nanofiber with chemicals and heat in the process, as current scanning electron microscopy (SEM) techniques tend to do.

Nanometer-scale tapers, or nanofibers, transmit light like normal optical fibers. But because they are reshaped into an hour-glass structure to manipulate light characteristics, some amount of light traveling inside nanofibers is forced to travel outside the fiber’s exterior surface. These so-called evanescent light fields along the length of the nanofiber can capture atoms and then carry information on light-matter interaction to a micron-sized fiber probe detector fabricated by the research team. This microfiber is then used to sample the local evanescent field along the surface of the nanofiber.

In their experiment, the researchers inject a combination of light shapes – solid circle, ring, and clover – into a nanofiber. These shapes are squeezed through the narrow, middle waist part of the hourglass design, where the light waves get distorted, and form interference patterns as they come out at the other end of the nanofiber. The team's fabricated probe captures these patterns as they come out.

As explained in a news release, "The nanofiber is on a moving stage and crosses the probe fiber at an oblique angle. At the touching point, a tiny fraction of nanofiber light evanescently enters the second fiber and travels to a detector. As they scan the probe along the length of the nanofiber, the probe detector collects information about the evolving patterns of nanofiber light. The researchers simultaneously monitor the light transmitting through the nanofiber to ensure that the probe process is harmless."

“We are actually seeing the different light modes mix together and that sets the limits on determining the fiber waist — in this case sub-angstrom,” said UMD graduate student Pablo Solano. “By directly and sensitively measuring the interference (beating) of light without destroying the fiber, we can know exactly the kind of electromagnetic field that we would apply to atoms.”

“With our new method, we can avoid using SEM, which destroys the fiber with imaging chemicals and heating,” added Eliot Fenton, a UMD undergraduate student.

The research team said their approach reveals the behavior of all light propagating modes in the nanofiber. And because the modal beat lengths in cylindrical waveguides depend strongly on the radius, it can accurately measure the radius of the nanofiber. Their experiment showed spatial frequencies providing a map of the average ONF [optical nanofiber] radius (over a 600 μm window) along the 10 mm ONF waist with a 40 pm resolution, and a high signal-to-noise ratio, which are consistent with standard SEM measurements.

"This fast method is immune to polarization, intrinsic birefringence, mechanical vibrations, and scattered light and provides a set of constraints to protect from systematic errors in the measurements," the scientists wrote in the journal Optica.