My 3 Favorite Technologies From SPIE DSS 2013 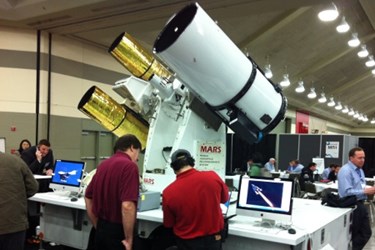 The SPIE Defense, Security, and Sensing (DSS) exhibition is a place where even the most hard-core tech geek can get lost amidst a sea of cutting-edge technologies being utilized in almost unthinkable ways. Autonomous robots doing what only humans could previously do, in environments too dangerous for humans to go. Tiny Raman spectrometers that analyze and identify chemicals or explosives in a matter of seconds. Cameras capable of providing remarkably detailed battlefield images in nearly any lighting or weather condition, at incredible distances. There's much more than anyone can hope to absorb in only three short days — or write about in a few short paragraphs.

For this reason, I'm going to share with you only my three favorite technologies from DSS. They were not necessarily the most practical, the most groundbreaking, or even the most important innovations on display. They were, however, the most captivating, drawing some of the largest crowds and eliciting surprised looks and childlike grins from almost everyone passing by.

InvisiTower: Tethered VTOL Powered By Laser Over Fiber
I was first introduced to LaserMotive's laser power beaming technology two years ago at SPIE DSS 2011. At the time, the company was primarily focused on delivering wireless power to UAVs (unmanned aerial vehicles) over long distances. By directing a high-intensity laser at a vehicle-mounted photovoltaic array — which converts the light into electricity — LaserMotive could unfetter UAVs from battery power, enabling them to stay aloft almost indefinitely and carry alternate payloads. While the company is still advancing this free-space laser power technology (Lockheed Martin conducted the first-ever laser-powered outdoor flight with the system last August), its emphasis at this year’s show was on laser power over fiber.

Buzzing in and around LaserMotive’s DSS 2013 booth were a pair of tethered VTOL (vertical take-off and landing) aircraft demonstrating its “InvisiTower” concept — a tiny 10W quadrocopter and a larger 75W modified Parrot AR.Drone (which any hobbyist could buy for $300, albeit without LaserMotive’s laser power receiver), both powered solely by laser over fiber. There are several reasons LaserMotive added laser over fiber to its repertoire, President Tom Nugent told me. For one, the light path is fully enclosed, allowing it to avoid the safety concerns associated with free-space laser power. Additionally, the system is autonomous (aside from monitoring the video feed) and is much lighter, secure, and safer than copper wire (since fiber is nonconductive, you don't have to worry about lightning strikes or contact with power lines). Applications include ISR (intelligence, surveillance, and reconnaissance), communications relays, underwater robots, and environments with high EMF (electromagnetic field) and RF (radio frequency) interference, such as commercial aircraft, research labs, hospitals using MRI machines, etc.

Next up for the technology: a 400W version that can carry up a 1 kg of payload in winds of >20 knots.

Virtusphere: Locomotion Simulation Training Technology
It was impossible to walk past the Virtusphere display without stopping and staring. Here, attendees climbed into a 10-ft.-high hollow plastic ball (think human hamster wheel), strapped on a wireless head-mounted display, picked up a motion-sensing gun controller, and proceeded to literally walk and (no-so-literally) shoot their way through a virtual training environment — all while other attendees gathered to watch their progress on an external monitor. While my performance anxiety dissuaded me from taking a “spin” in the contraption at DSS, I’ve embedded a video below so you can see it in action.

In the military/defense arena, the Virtusphere platform is used to prepare soldiers for dismounted operations in dangerous environments. Users can walk and run (even jump) freely in any direction within the Virtusphere, moving over great distances without encountering any real-world physical obstacles (including enemy fire). A host of sensors collect and send movement data to a computer, which in turn delivers a real-time virtual combat experience back to the user via the headset. The U. S. Military Academy at West Point, the Naval Research Laboratory (NRL), the U.S. Army’s Mounted Warfare TestBed (MWTB), and Maxwell Air Force Base are among the organizations currently using the Virtusphere.

It probably won’t come as a surprise that the Virtusphere is also being targeted at the entertainment/gaming industry. In fact, Virtusphere CEO and Founder Ray Latypov said the company plans to introduce a 3D virtual gaming controller for the system in the next two to three months.

MARS: Mobile Aerospace Reconnaissance System
While slightly less active/interactive than LaserMotive’s or Virtusphere’s, Mars Scientific’s display was certainly no less impressive. The trailer-mounted Mobile Aerospace Reconnaissance Systems, or MARS, cast a long shadow over the exhibit floor (see my smartphone pic at the top of this article). Systems like MARS combine visual wavelength (VIS), infrared (IR), and spectral imaging technologies, enabling the company to deliver high-resolution, long-range mobile tracking and imaging services with “more pixels on target and a better point spread function (PSF) than most government-operated tracking systems” (according to the Mars Scientific website).

Mars Scientific does boast an impressive customer list (NASA, ESA, Boeing, Lawrence Livermore National Laboratory, etc.), and some of the examples they showed me were rather impressive. There were ground-based images of the International Space Station (ISS), infrared images of the Space Shuttle Endeavour reentry showing detail of the boundary layer transition and thermal protection system (TPS) tiles, and multispectral images of the reentry and breakup of the Hayabusa spacecraft (which was moving at 27k mph when the imaging system tracked it and captured images from over 120 miles away). The most current (and newsworthy) images had been taken just two days before I stood at the Mars Scientific booth — stunningly clear photographs of the Virgin Galactic SpaceShipTwo (SS2) commercial spacecraft, during its first rocket-powered supersonic test flight, over the Mojave Desert on April 29. I included the image below (courtesy Virgin Galactic). 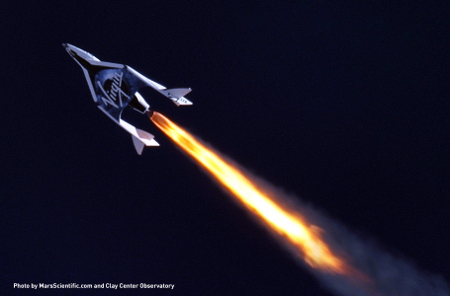 Again, this is merely a small and highly subjective list of what was an impressive lineup of technologies at SPIE DSS 2013. What was your favorite tech from SPIE DSS 2013? What did you see that I may have missed? What other innovative defense/security/sensing technologies are worth discussing?