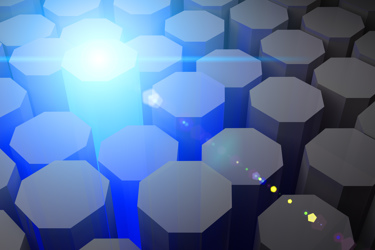 Researchers have developed a new technology that could enable chip-based optical communication links that process and move data faster than today's electronic-based devices.

Last month, we reported that Korea University’s Myung-Ki Kim and a team of researchers developed an all-optical method for driving multiple highly dense nanolaser arrays. This approach could aid in meeting the ever-growing need to move greater amounts of data faster.

“The development of optical interconnects equipped with high-density nanolasers would improve information processing in the data centers that move information across the internet,” said Kim. “This could allow streaming of ultra-high-definition movies, enable larger-scale interactive online encounters and games, accelerate the expansion of the Internet of Things, and provide the fast connectivity needed for Big Data analytics.”

Optica notes researchers demonstrated that densely integrated nanolaser arrays — in which the lasers are just 18 microns apart — can be fully driven and programmed with light from a single optical fiber.

“Optical devices integrated onto a chip are a promising alternative to electronic integrated devices, which are struggling to keep up with today’s data processing demands,” said Kim. “By eliminating the large and complex electrodes typically used to drive laser arrays, we reduced the overall dimensions of the laser array while also eliminating the heat generation and processing delays that come with electrode-based drivers.”

These newly developed nanolasers could be used in any number of ways, including as optical integrated circuit systems which detect, generate, transmit, and process the information on a microchip via light. In this instance, fine copper wires currently used in electronic chips would be replaced with optical circuits using optical waveguides, allowing for much higher bandwidths while generating less heat. However, because the size of optical integrated circuits is quickly reaching into the nanometer regime, there is a need for new ways to drive and control their nano-sized light sources efficiently.

“Lasers require energy to emit light, which is provided through a process known as pumping,” writes Tech Explorist. “This is commonly done for nanolaser arrays utilizing a pair of electrodes for each laser inside an array, which consumes a lot of space and energy on the chip and slows down processing. The scientists swapped these electrodes for a special optical driver that uses interference to create customizable light patterns to get around this critical limitation. An optical cable that has nanolasers printed on it carries this pump light.”

The researchers used a high-resolution transfer-printing technique to fabricate multiple photonic crystal nanolasers spaced 18 microns apart to demonstrate this approach. These arrays were applied onto the surface of a 2-micron-diameter optical microfiber. This had to be done in a way that precisely aligned the nanolaser arrays with the interference pattern. The interference pattern could also be modified by adjusting the driving beam’s polarization and pulse width.

The research team showed the design allowed multiple nanolaser arrays to be driven using light traveling through a single fiber. The results matched well with numerical calculations and showed that the printed nanolaser arrays could be fully controlled by the pump beam interference patterns.

“Our all-optical laser driving and programming technology can also be applied to chip-based silicon photonics systems, which could play a key role in the development of chip-to-chip or on-chip optical interconnects,” said Kim. “However, it would be necessary to prove how independently the modes of a silicon waveguide can be controlled. If this can be done, it would be a huge leap forward in the advancement of on-chip optical interconnects and optical integrated circuits.”

Researchers concluded that they “demonstrated all-optical programming of photonic crystal nanolaser arrays through switchable modal interference of a pump beam in a single optical microfiber,” as well as “theoretically confirmed that the interference pattern of the pump beam could effectively program the driving of multiple nanolasers on a single microfiber by adjusting the phase and polarization of the pump beam.” This is according to the researcher’s paper which was published by Optica.

They further write, “Although our results have demonstrated programmability for up to three lasers, our approach can be extended to a larger number of sources upon fine and rapid control of the polarization and phases of the propagation modes, which can be achieved by holographic modal interference techniques. We believe that our method can be readily adapted to the implementation of densely integrated on-chip WDM sources in silicon photonics and can lay the foundation for applications in other disciplines, such as biosensing, multicolor interferometry, and quantum control of optical emitters.”