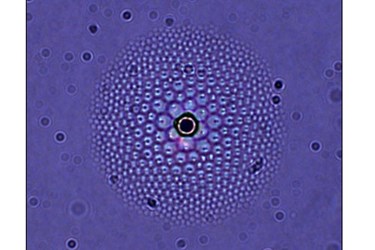 A 3-D, liquid-crystal array shaped like a flower can be used as a lens similar to an insect’s compound eye, a team of material scientists, chemical engineers and physicists has found.

The University of Pennsylvania team has been working to use liquid crystals as a medium for structure assembly, a growing nanotechnology field known as directed assembly. In earlier work, the team produced patterns of “defects” — useful disruptions in the repeating patterns found in liquid crystals — in nanoscale grids and rings, but they used tiny posts as templates. Their new work adds a more complex pattern out of an even simpler template: a 3-D array shaped like a flower.

“Before we were growing these liquid crystals on something like a trellis, a template with precisely ordered features,” said Randall Kamien, a professor in the Department of Physics and Astronomy. “Here, we’re just planting a seed.”

The “seeds” they used were silica beads — essentially, polished grains of sand. Planted at the top of a pool of liquid crystal, flowerlike patterns of defects grow around each bead.

“Not only is the interface at an angle, it’s an angle that keeps changing,” Kamien said. “The way the liquid crystal responds to that is that it makes these petallike shapes at smaller and smaller sizes, trying to match the angle of the bead until everything is flat.”

Surface tension on the bead also makes it so these petals are arranged in a tiered, convex fashion. And because the liquid crystal can interact with light, the entire assembly can function as a lens, focusing light to a point underneath the bead.

“It’s like an insect’s compound eye, or the mirrors on the biggest telescopes,” Kamien said. “As we learn more about these systems, we’re going to be able to make these kinds of lenses to order and use them to direct light.”

This type of directed assembly could be useful in making optical switches and in other applications, the team said.

Source: The University of Pennsylvania