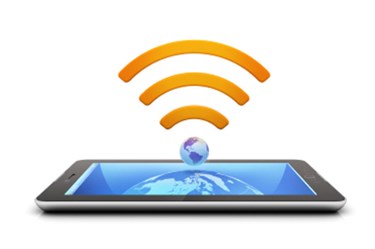 A new type of Li-Fi (Light Fidelity) optical wireless system being developed by students at Eindhoven University of Technology (TU/e) Institute for Photonic Integration is up to 100 times faster than the best Wi-Fi connections available.

The term 'Li-Fi' was coined by University of Edinburgh Professor Harald Haas during a TED Talk in 2011. While Wi-Fi uses radio waves, Li-Fi uses visible light to transmit data electromagnetically. An early model for the Li-Fi system consists of LED (light emitting diodes) bulbs to transmit data omnidirectionally in a room. But this type can only handle limited bandwidth, and is prone to congestion when multiple devices in a room try to connect to the internet. Keeping those bulbs on at all times, and preventing the light from being blocked (so as not to interrupt signals), also seem impractical.

Other experimental Li-Fi systems, meanwhile, use energy-intensive movable mirrors to beam infrared light, and each mirror is only capable of handling one ray of light at a time.

However, a new type of Li-Fi with none of those drawbacks has been proposed in a PhD dissertation by Joanne Oh, a researcher at TU/e. Her system uses ‘light antennas’ that contain no moving parts and do not require power and maintenance. These are mounted on the ceiling and direct rays of light from an optical fiber. They feature a pair of gratings that radiate the rays at different wavelengths at different angles. Each wavelength is assigned to a different device, so that it does not compete with other devices for bandwidth. If a device moves out of an antenna's line of sight, another antenna takes over. A safe infrared wavelength is used so it is considered harmless to the human eye.

"Current wi-fi uses radio signals with a frequency of 2.5 or 5 gigahertz. The system conceived at TU Eindhoven uses infrared light with wavelengths of 1500 nanometers and higher; this light has frequencies that are thousands of times higher, some 200 terahertz, which makes the data capacity of the light rays much larger," according to a news release.

Joanne Oh achieved a speed of 42.8 Gbit/s over a distance of 2.5 meters. The average connection speed in the Netherlands, 17.6 Mbit/s, is two thousand times less, and the fastest Wi-Fi system available, at about 300 Mbit/s, is more than a hundred times slower than the Eindhoven Li-Fi network.

Other PhD students at the university are working on ways to track the location of wireless devices, while others are figuring out how to connect the light antennas with fiber-optics, according to Engadget. They are part of the wider BROWSE project headed up by professor of broadband communication technology Ton Koonen, who believes that their Li-Fi network will start to connect video monitors, laptops, or tablets in as soon as five years.

Their work is funded by the European Research Council, and published in the Journal of Lightwave Technology and IEEE Xplore.