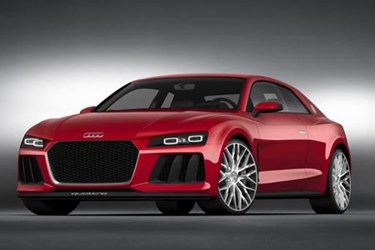 At the massive Consumer Electronics Show (CES) in Las Vegas this week, Audi Chairman Rupert Stadler delivered a keynote speech in which he proclaimed that Audi is “showing the full spectrum of what it means to be a leader in innovation.”  His comment alluded to, among other things, the photonics technology that headlines the company’s newest concept car, the Audi Sport Quattro Laserlight. While the vehicle boasts many innovative electronic features (including an Android-based infotainment system), its most prominent feature is its set of laser-powered headlights.

As described by Automotive News, comparable laserlighting technology developed by BMW uses a combination of lasers and phosphor. Rays from up to four blue laser diodes are directed onto a phosphorous plate, which transforms the lasers into bright white light. The light is then projected onto the road via standard headlight optics.

According to Audi, its laser-powered beams can light up the road about two-times further than standard LED headlights, with three times the brightness. The laser diodes are also smaller than LEDs (a few microns in diameter) and use two-thirds the energy.

The vehicle does not, however, use laser-powered headlights exclusively. Its low-beams are powered by a matrix of LED lights and an aperture mask. The laser diodes are only used for the vehicle’s high beams.

While laser lighting has its benefits, the practicality of using laser technology to illuminate roadways is open to debate. Laser diodes are more expensive than LEDs, and they are sensitive to heat. And, while heat sinks can be designed to handle the excessive heat generated by the diodes, there is still the question of whether or not these lights can get government approval.

Stadler mentioned in his keynote speech that we are entering the “fourth era” in the history of the automobile, one “in which we are moving from refining the automobile, to redefining mobility.” Incorporating advanced photonics technology within the automotive industry is certainly one step in that redefinition.

Are laser-powered headlights necessary or practical? Are there any safety concerns for having these exceedingly bright lights on the road? Can laser diode technology legitimately compete with LED lighting? Please post your comments below.