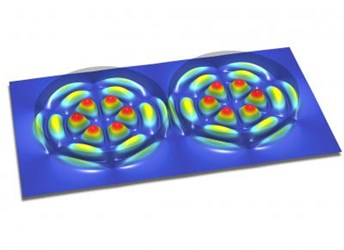 At the Vienna University of Technology a system of coupled lasers has been created which exhibits truly paradoxical behaviour: An increase in energy supply switches the lasers off, reducing the energy can switch them on

Sound waves fade, water waves ebb, light waves are dissipated by a wall. The absorption of waves is a very common phenomenon. But only recently have physicists realized that amazing new possibilities are opened up, when this energy loss, rather than being seen as an annoying nuisance, is actually considered a desired effect. At the Vienna University of Technology, a system of two coupled lasers has been created, in which wave dissipation leads to a behaviour completely contrary to intuition: additional energy can switch it off; a reduction of energy may switch it on. This way, logical circuits can be built using light. The experiment has now been presented in the journal Nature Communications. 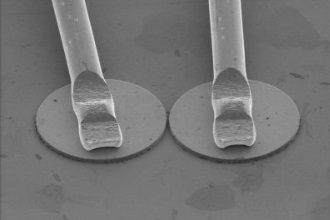 "Usually, there is a simple relationship between the amount of energy which is pumped into a laser and the brightness of the beam emitted by it", says Professor Stefan Rotter (TU Vienna). "If the energy supply is too small, nothing happens. Once a critical threshold is reached, the laser starts to emit light, and the more energy is put in, the brighter the laser beam gets."

But things are not always that simple. When coupling two small circular lasers to a joint system, the delicate balance of energy gain and loss leads to intriguing physical effects. Two lasers, which would emit light individually, can switch each other off, if they are coupled. More energy does not lead to more light, but to complete darkness. Inversely, a reduction of energy supply can switch on the light.

"We were puzzled when we first discovered the effect in computer simulations", says Stefan Rotter. Now the phenomenon, which had been predicted two years ago, could be experimentally realized in a joint effort of the faculties for physics, electrical engineering and mathematics of TU Vienna and of the Princeton engineering faculty. For the experiment, so-called quantum cascade lasers were used, emitting at terahertz frequencies, with a diameter of less than a tenth of a millimeter. "These micro lasers are perfectly suited for the experiments, because their optical properties can be finely tuned and their wavelength is rather large", says Martin Brandstetter (also TU Vienna). This makes it easier for the light wave to pass from one laser into the other.

Desired Imperfections
In physics, the absorption of waves is usually seen as an unwanted side effect. "For simplicity, theoretical calculations often describe an optimal situation with zero dissipation", says Stefan Rotter. Mirrors with 100% reflectivity, optical fibres which transmit 100% of the incoming light or sound waves which do not lose any of their energy are just easier to describe mathematically. But sometimes perfection is boring. The interesting coupling effects in the laser can only be generated when a special absorbing layer is placed on the lasers, which dissipates part of the light.

Such laser coupling can lead to new electro-optical switches. In the future, optical elements could be used to process information, similar to electronic elements we are using today. Coupled micro lasers would be ideally suited for this purpose: they can easily fit on a chip, and, as demonstrated through this work, they can be used as switches in highly non-trivial ways.