Answers to those questions go a long way toward defining a system configuration and price. In this article, I’d like to discuss the various possible configurations of steered beam fiber laser marking systems.

The basic components of a steered beam fiber laser marking system must include:

Obviously, the quality of selected components has everything to do with the reliability and performance of the system but, with those components in a proper configuration, one has the ability to direct a focused laser beam over the surface of a substrate in a controlled manner. If the lens is focused on a suitable substrate (some material that can absorb the wavelength of light produced by a fiber laser), then those components will be capable of producing marks on the surface of the substrate. Those marks can be in whatever form is allowed by the laser marking software, such as text, graphics, or machine readable codes.

At Jimani, this very basic configuration is what we call our OEM Fiber Laser Kit. It is intended for use by those who wish to integrate the components into their own workstation or automation.

An example of a useful application of this configuration might be a manufacturing facility that has an existing conveyor system with parts moving along it. If those parts require some type of marking or identification, the scanhead and lens of an OEM Fiber Laser Kit could be mounted above the conveyor, with the focusing lens positioned such that parts on the conveyor are the focal point of the lens. As parts pass under the lens, the conveyor system could communicate with the marking software and then mark each part as it passes under the lens.

Another application for an integrated-component workstation might be a workstation-mounted laser. There have been many instances of users mounting a laser marker onto the table of an old milling machine, and then using the X, Y, and Z motion axes of the mill table to position parts to be marked and to focus the lens on them.

Although prices vary with quality and support, the core components to move a laser beam around and to draw lines in the shape of text and graphics are the same for all marker systems and integrators. A laser, scanhead, F theta lens, marking software, and control electronics are found in every steered beam fiber laser marking system.

Many laser marking applications require that the system be able to mark and accommodate a wide range of part types and sizes. Users with this requirement generally prefer to buy a fiber laser marking system that is already integrated into a versatile workstation. The workstation should allow the operator to easily load a wide variety of part sizes and shapes, as well as provide the ability to position those parts to the correct marking location.

Most fiber laser marking systems, in my opinion, don’t pay enough attention to the Z-axis requirement needed for a versatile workstation. No matter what, the focusing lens has to be some distance away from the surface being marked. The larger the marking field of the lens, the further away the lens must be from the surface of the part. For example, a 7-inch-square marking requires that the bottom of the focusing lens be about 11.5 inches away from the part. “Away” generally means “Above,” since most lens and scanheads are mounted above the parts to be marked.

A 9-inch-square marking field requires that the bottom of this lens be positioned more than 15 inches above the marking surface. When trying to mark large or tall parts, the Z-axis requirement of the system is the height of the part, plus the distance between the lens and the marking surface at the focal point of the lens. Unless one is only marking thin plates or small parts, a substantial amount of Z-axis travel is essential to a versatile workstation.

The standard workstation at Jimani was designed with that in mind. Our design was highly influenced by or job shop marking business, in which we have a huge range of part sizes to mark. We also need the ability to mark tall parts with large field lenses, and that means lots of Z-axis travel requirement. As you can see in the example below, lots of Z-axis travel means a tall system. If you were only marking nameplates, this workstation configuration is probably overkill. 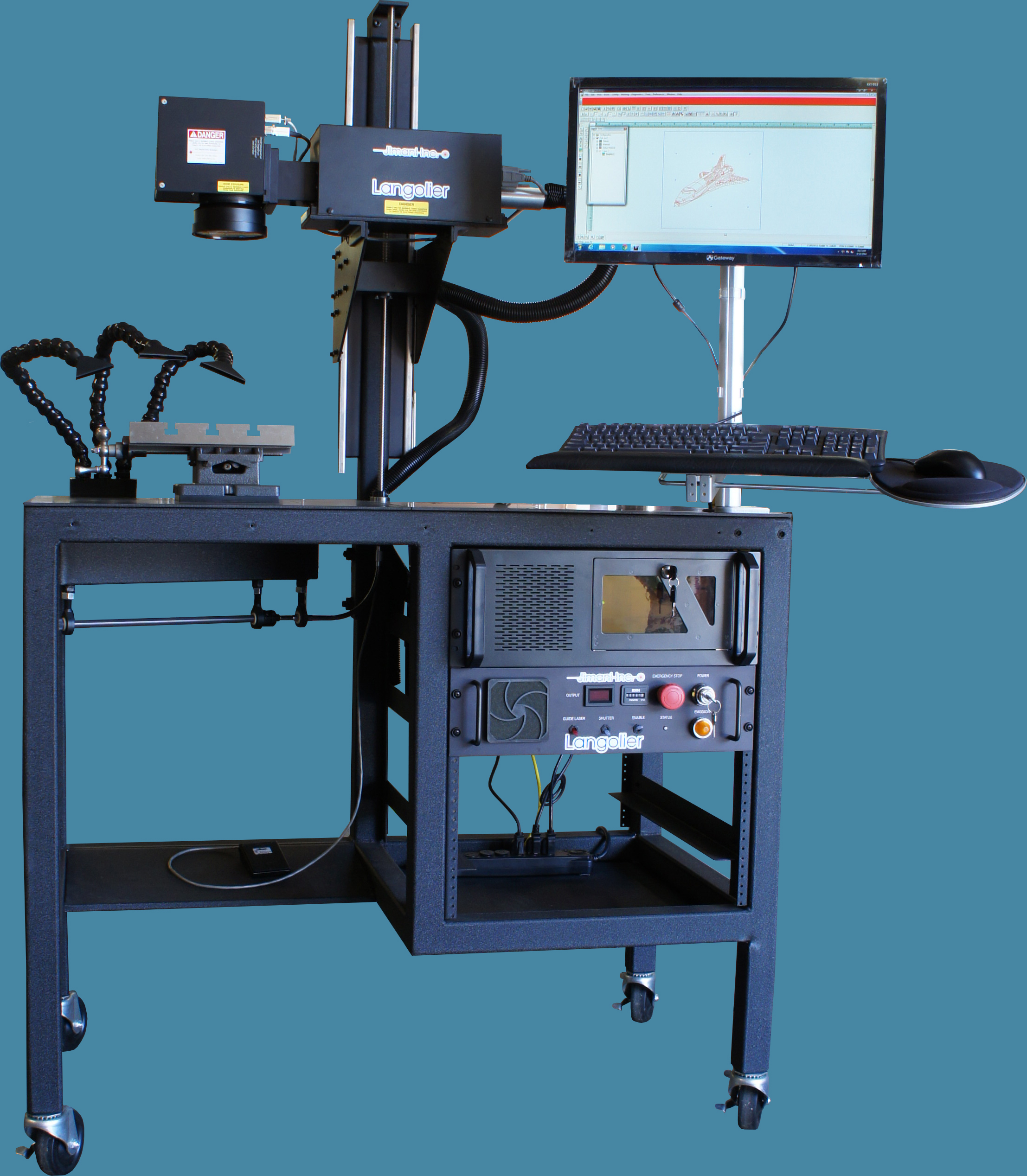 The workstation above is an open-frame system. It allows the utmost flexibility for part setup and loading. However, many users are uncomfortable with open-frame systems and prefer to have an enclosure around the marking area. When designing or buying an enclosure, keep in mind that the enclosure dictates the size of the largest part that can fit inside of system. I have seen many systems with enclosure panels removed or cut open in order to accommodate larger parts, and I am always left to wonder why the enclosure was installed in the first place. If we place an enclosure around our standard workstation, it looks like this: 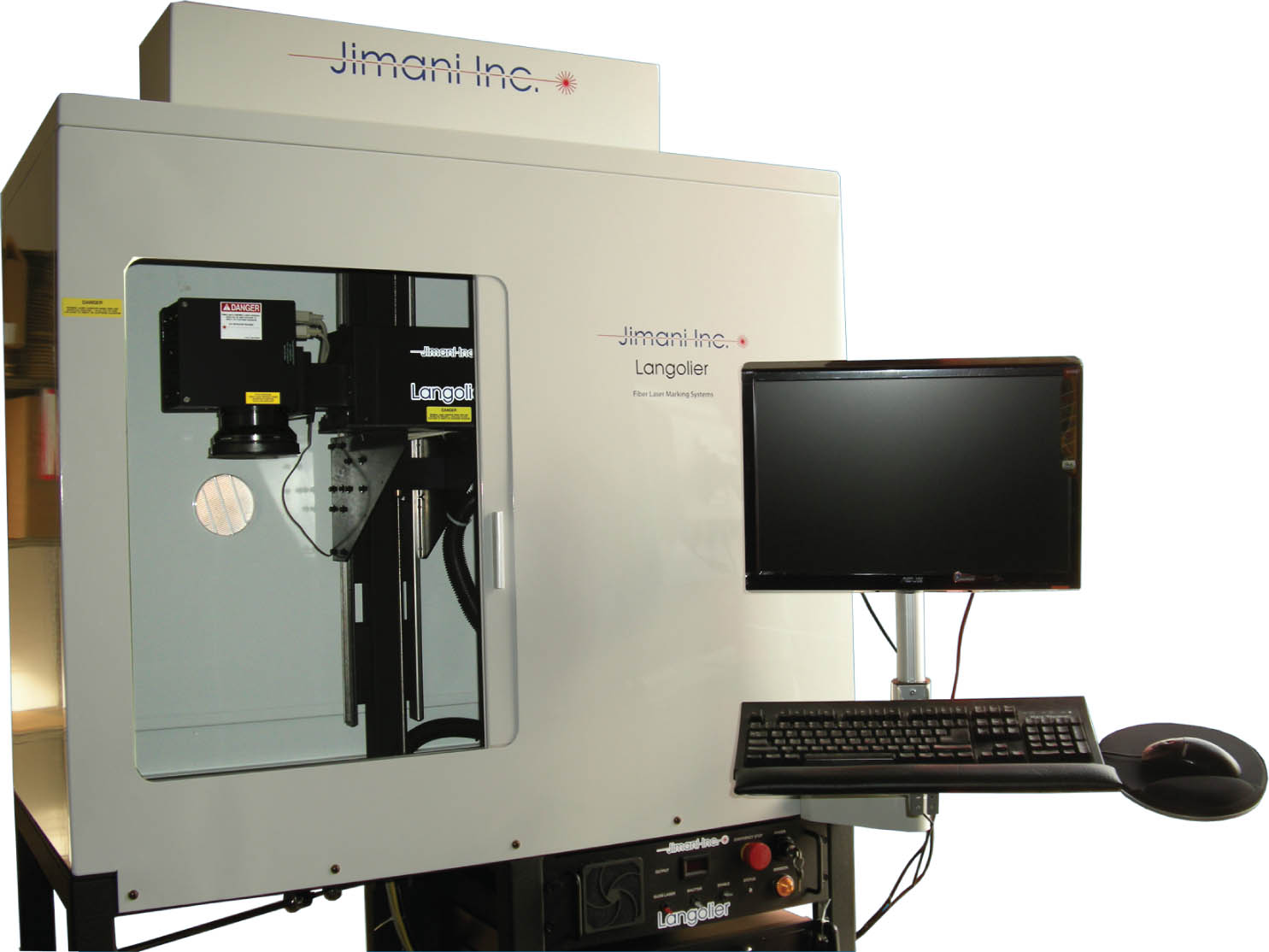 If a marking system has an enclosure then, by definition, it must be mounted on some type of workstation. Although there usually is not a lot of cost associated with an enclosure, workstations vary in size and functionality and can add thousands of dollars to the cost of a system.

Fiber laser marking system enclosures can come in many shapes and sizes, and they can be customized for specific applications. Just remember, the size and shape of the enclosure will ultimately determine the usefulness of the system. Below is an example of a custom enclosure that was designed for a very specific application. This particular system had to accommodate a long part that was marked in several places along its length and then rotated in order to be marked on the other side. 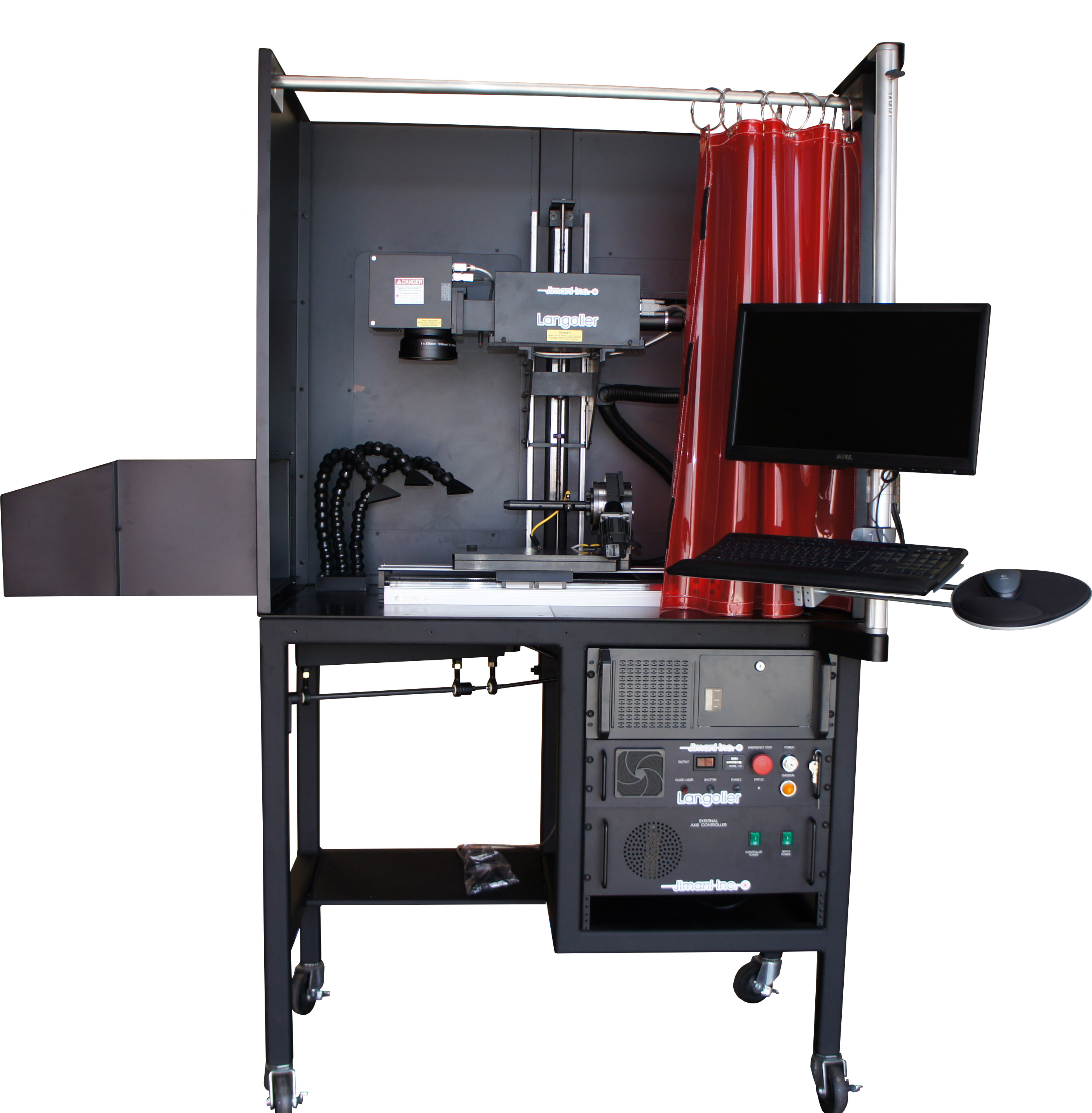 A custom system can be as elaborate as a systems integrator is willing to build or an end user is willing to pay for. Typically, a custom system is made for a specific, repetitive application. Customization can be as simple as fabricating fixtures to hold and locate specific parts, or as elaborate as integrating a laser marker with some type of automated parts feeding and handling system, like a bowl feeder or conveyors. When the automation becomes very complex or elaborate, though, the laser marker system provider might not be the best choice of vendors to build the entire system.

The world is full of automation houses that design and build complicated automation systems and they will generally do a better job of it than a laser marking systems manufacturer. In many cases, the laser marker is the simplest component in an elaborate automated system. Over the decades we have been in this business, we have seen many good laser marking applications labeled as unsuccessful, simply because laser marker manufacturers got in over their heads when they took on the task of building the complex automation. We’ve learned that having good automation partners is a far better approach than trying to sell and build something that we’ve never built before.

Automation is a broad term. It might be as simple and one or more software-controlled, motorized axes, or as complicated as a full-blown conveyor system that sorts, aligns, and feeds parts under the marking field. In some cases, the cost of automation will exceed the cost of the laser marker itself.

For more information, please feel free to contact Jim Earman at (805) 486-1399, jearman@jimani-inc.com, or by visiting www.jimani-inc.com.