In our first article, we delved into the basics of using a steered beam fiber laser marking system and how to make a mark on just about any type of material.

We will now dig into the specifics of making a mark on a particular part shape. Laser marking can be broken down into several categories:

Regardless of the category of laser marking being performed, the following statements are true:

The marking field is defined as the two-dimensional area in which a particular laser marking optical configuration can deliver a laser beam in order to make a usable mark. Two-dimensional lenses are defined as flat field lenses because light passing through the lens can be focused in a plane rather than at a single point. The marking plane in a flat field lens is perpendicular to the lens. Typical marking field sizes range between 4” by 4” marking planes up to 12” by 12” marking planes. Not all field sizes are suitable for all materials because of spot size and power density considerations. Anything that can be drawn in a two-dimensional vector file can be marked by the laser, assuming that the material is a good match for the wavelength of the laser being used.

The part in the photo below had a marking requirement for a greater than 30”-long graphic. We used Prolase Plus Laser Marking Software to automatically break the graphic into “tiles.” The part was placed on an X axis table, and, within Prolase, a desired “tile width” was selected.  The software sectioned the graphic into individual tiles and then controlled the motion of the X axis table such that the appropriate tile was positioned over the appropriate location on the part. The process was repeated until the entire image was marked. The only limitation on size was the travel of the X axis table. 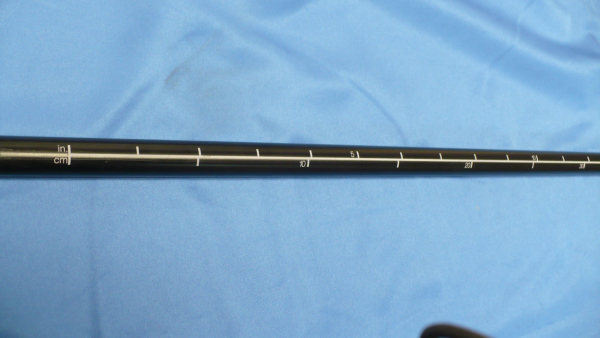 You can see the part being marked in the video below:

Round Or Curved Parts

Laser marking on round or cylindrical shaped parts poses its own set of challenges.

The depth-of-focus of the particular laser and optical system determines how far around the circumference of the part a mark can be made without rotating the part. A good rule of thumb is that a mark can be made about 60° around the circumference of a 1” diameter part without rotating the part, assuming that there is a good match between the wavelength of the laser and the material being marked.

Unless the part is rotated under the marking field, the size of the mark, whether it is text or logos, is limited by two factors:

1.       The depth-of-focus of the laser and beam delivery system

2.       The distortion that occurs when marking around the circumference of an object

The depth-of-focus of the laser and beam delivery system is ultimately the limiting factor in circumferential marking. As the laser beam passes through the optimum focal point, the focused spot size grows. In short order, there is insufficient power density to provide a uniform appearance to the mark around the circumference.

Depth-of-focus is not just a function of the lens or diameter of the laser beam. Material plays an important role. As the laser beam moves away from the top of a cylindrical object, the beam also moves away from the optimum focal point of the lens. Some materials are very sensitive to laser focus, and the size of a mark around their circumference is limited by the change in laser power density as the beam moves away from the optimum focal point. Contrarily, other materials are quite forgiving of focal point changes, and the limiting factor becomes the distortion that occurs in the shape of marked characters or logos. 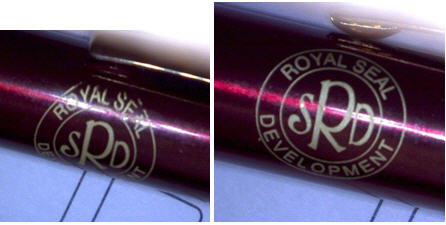 The photo above on the left shows the geometric distortion that occurs when marking around the circumference of a pen. Not only is the shape of the graphic distorted, the elongated edges of the mark have exceeded the depth-of-focus of the lens and the power density is insufficient to burn those edges.

The photo above on the right was marked using the “Projection Correction” feature in Prolase 7 Plus software to compensate for the geometric distortion. The circle looks like a circle, and the depth-of-focus of the lens was not exceeded.

Round Or Cylindrical Parts That Must Be “Tiled”

Once the depth-of-focus of the lens is exceeded or the marking goes further than 160° around the circumference, the only option available is to rotate the part. Circumferential laser marking has typically been accomplished by making the marker act like a dot matrix printer. Dot matrix printers work by printing a row of pixels in the image, advancing the paper by a pixel height, and then printing another row of pixels. This process continues until the entire image is printed, pixel row by pixel row. Some laser markers employ this technique to laser mark bitmap images around the circumference of a cylinder.  Using this technique, the laser will print a row of pixels in the bitmap image, and then the rotary indexer will advance the part by the height of one pixel. The process continues until the entire image is printed. This is a slow process and can only be used with bitmap images.

Steered beam (galvo driven) laser markers act more like plotters than dot matrix printers. For a variety of reasons, including speed and quality, steered beam markers work best when they draw lines, not place pixels. Those lines, whether they are graphics or text, are in a vector image format. When the desired size of a vector image exceeds either the depth-of-focus of the lens or the 160° of the circumference, the image must be broken into tiles in a process similar to engraving large images on flat parts. Rotary tiling requires that the software communicates with and controls a rotary indexer. The rotary indexer must have enough precision to allow tiles to line up precisely after each index. A single line engraved by the laser will have a kerf width of .002” to .003,” and the rotary indexer must place the tiles within a laser line width of each other. Otherwise, “seams” will be visible in the finished product.

At Jimani, we use rotary encoded servo motors on a Sherline rotary indexer and provide a resolution of 144,000 steps per 360° of revolution. In the video below, you can see rotary tiling being accomplished with Prolase 7 Plus software, a Jimani Langolier Servo Controller, and Sherline Rotary Indexer.

Four marks are placed on the cylinder. The mark on the far right is done without correcting for geometric distortion. The next mark to the left is the same engraving but with Projection Correction enabled in the Prolase 7 Plus software. The last two images break the graphic into tiles to be marked around the circumference of the part. Rotary and linear tiling can also be combined to mark long images around a circumference, as shown in the video below. (Please disregard my sleeping dog in the background of the video at 1:15. He was just tired.)

Some laser marking applications require that the marking is done on surfaces that are at different heights with respect to each other. If that difference in height falls within the depth-of-focus of the lens and the overall size of the engraving falls within the size of the lens marking field, nothing has to move or be repositioned during marking. If the height difference between marks is beyond the depth-of-focus of the lens, then either the lens or the part has to be repositioned so that the surface to be marked is at the focal point of the lens.

Fiber lasers are small and lightweight enough that motorizing the platform that the laser sits on in order to change the focus position is not difficult or complicated. The Z axis drive mechanism must be perpendicular to the plane of the marking field and have positioning accuracy and repeatability of a few thousandths of an inch over its travel. At Jimani, we accomplish this task by attaching a rotary encoded servo motor to the Z axis drive screw on the workstation with a resolution of 128,000 motor counts per inch of Z axis travel. Prolase 7 Plus software communicates with the motor and allows an unlimited number of Z axis positions within a laser marking job.

The technique of moving the entire laser in the Z axis works well when each separate marking height location contains a discreet mark. The Z axis is not repositioning during marking, and there is no Z axis tiling. This technique is not appropriate for marking large images over irregular surfaces. That task is best accomplished by equipment that performs true three-dimensional marking.

Some parts have such an irregular shape that the laser marking requirement is not well served by tiling or Z axis stepping techniques. These parts are the domain of three-dimensional marking. Three-dimensional marking in most of its forms is accomplished by changing the location of the point where the lens brings the laser beam to a focus. A third axis that can control focus is needed. Trying to move the laser with a scanhead and the attached lens so that it follows the contours of an irregular surface is totally impractical. The third axis must be complementary and similar to the motions provided by the X and Y galvos in the scanhead. A third axis galvo of some sort is generally used to control focus. Either the actual focusing lens must be moved or a relay lens that feeds the flat field lens must be used. In the case of moving the focusing lens, a simple, relatively long focal length lens is attached to a galvo and placed before the galvos. The same concept is used when a relay lens is used to change the focal point of a flat field lens. Regardless of the type of focus changing optic used, information for the Z axis position must be fed to the galvo from the laser marking software. Marking files must be in some format that contains three-dimensional information.