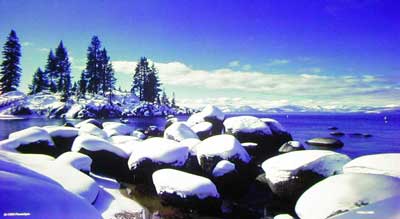 Since the early 1960s, engineers have dreamed of using lasers to project high-resolution moving images, but they had been unable to create a practical device that could approach the color range, contrast, saturation, and resolution of a high-quality television image, let alone that of theatrical film. The problems were legion: For example, the available colors (typically 488 nm, 514 nm, and 647 nm) were not capable of faithfully reproducing the full color range. The projection technologies (acousto-optic modulators, galvanometers, and/or spinning disks) were too slow for full-motion high-density video over an extended area, and maintaining beam registration over long periods of time was extremely difficult. In addition, the cost of maintaining the inefficient water-cooled argon- and krypton-ion lasers required for most projection applications was prohibitive.

As a result, laser projection systems have been limited to light shows and Laserium-type applications, where the images are line drawings or relatively low-density patterns (see Figure 2). 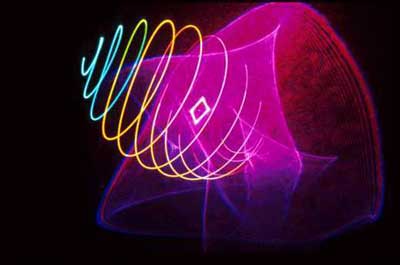 Temporarily stymied by the challenges of laser-based systems, high-resolution projection systems took another path. Hughes-JVC, a US-Japan joint venture, used high-intensity xenon lamps with RGB filters as the light source and "light valves"—digitally addressable screens that reflect light on a pixel-by-pixel basis—as the imaging method. With this basic technique, they have developed display systems that produce up to 12,000 lumens of light output with resolution as high as 2000 x 1280 DPI, and can display flicker-free theater-quality images on screens as wide as 60 feet. Other digital projection systems use similar techniques.

In 1988, COLOR received its first patent, involving a scheme for modulating pulsed laser light with video signals to produce full-color video images. The company subsequently demonstrated a full-color, high-output laser image in 1992, and has installed systems based on acousto-optic and mechanical scanning in several venues, including the Museum of Science in Boston and the Manchester NH airport.

To generate the red output, system designers use a 1.0-µm pumped optical parametric oscillator (OPO) to generate 1.5 µm output. The beam passes into a sum frequency mixing (SFM) module which combines the 1.0 µm output with the 1.5 µm output to generate pulsed 628 nm emission with an average power of 10 W. Robert Martinson of COLOR declined to specify the gain medium in the OPO, noting only that it was a highly robust, turnkey design.

The green laser is a frequency-doubled neodymium-doped vanadate (Nd:YVO4) laser capable of producing 13 W at 532 nm. A second Nd:YVO4 laser operating at third harmonic produces 7 W of output at 447 nm. All of the lasers are pumped by broad-area diode laser bars.

Combined output for the system exceeds 10,000 lumens. The intensity, however is reduced by 2/3 as it passes through the projection system, so effective luminance at the screen is 3000 ANSI lumens.

The system generates an image with output resolution of 1600 x 1200 DPI, with a sequential contrast ratio as high as 1700:1 (lamp-based systems typically offer 500:1). Video bandwidth can be as high as 150 MHz.

Performance
The $100,000 target price of the new system is significantly higher than that of lamp-based systems of similar output intensity, but the advantages of the system, says COLOR president and CEO Masayuki Karakawa, justify the premium. He cites the increased resolution (1600 x 1200 vs. 1024 x 768), exceptional contrast (1700:1 vs. 500:1), unequaled color range and saturation, and lower operation and maintenance costs (arc lamps must be replace every 500–1000 hours at a cost of $2,000 to $3,000) as major competitive advantages.

COLOR demonstrated the new ColorVision system to investors and invited guests on February 17, 2000 in a specially built venue with a 20-foot-wide theater screen (see Figure 1, at top). Since then, the system, operating at a resolution of 1920 x 1080 dpi, has projected HDTV movies with a 9 x 16 aspect ratio using a 1-inch-format digital VTR, scoring points for both the depth of color saturation and the quality of the blacks. Production shipments are planned for 2001.

About the author…
John Wheeler is a freelance science and technology writer based in California.