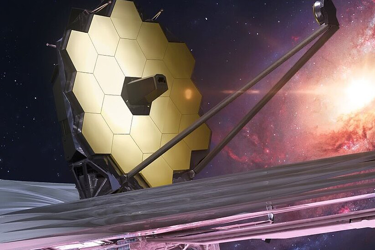 On December 25th, 2021, it was finally time for an Ariane 5 heavy launcher to propel the James Webb space telescope (JWST) into space. After thirty flight days, the Hubble space telescope's successor reached its destination at a so-called Lagrange point, 1.5 million kilometers away from Earth. From this point, together with Earth, the telescope will travel around the sun. Using mirrors and detectors, JWST can look back far into the past – right back to our universe‘s infancy. To do so, the telescope uses radiation from the red part of visible light (0.6 µm) up to mid-range infrared (28 µm). Its mission is to discover the beginnings of our universe, and, since July 11th, the JWST has been sending fascinating images from the depths of space. During assembly of JWST, which has a value of several billion dollars, PI technology came to the rescue several times in critical places.