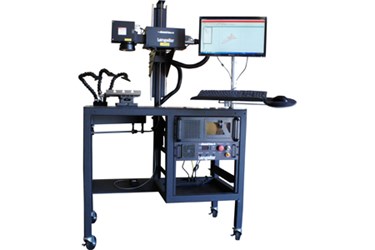 Laser marking is like burning leaves with a magnifying glass.

In order to burn a leaf with a magnifying glass, one places a simple lens over the leaf at the focal point of the lens and lets the lens collect the rays of the sun. The sunlight collected by the lens then focuses on the leaf and concentrates sunlight on a small spot on the leaf. Then, bingo! The resulting heat causes the leaf to smoke and eventually catch fire.

Laser marking systems employ exactly the same principle. Instead of sunlight being passed through a simple lens, however, laser light is passed through a more complex lens — an f theta lens. While sunlight consists of many colors or wavelengths, laser light has the property of being monochromatic, meaning that laser light is all the same color or wavelength. The wavelength depends on the type of laser. Different materials absorb different wavelengths of light. If the material placed under the laser happens to absorb the wavelength of that laser, then there is a good match.

For laser marking applications, the laser beam is focused onto the surface of the material to be marked with an f theta lens. An f theta lens has the property of being able to maintain its focus throughout a plane, rather than focusing on just one spot. The laser beam is steered through the f theta lens by a pair of computer-controlled mirrors. The laser beam can be focused on the material anywhere within the plane defined by the f theta lens, and if there is a good match between laser wavelength and material, the result will be a mark left on the material. That mark can be in the form of graphical images, text, machine-readable codes (i.e. barcodes, UID codes or 2D codes), or any other type of mark imaginable.

Different laser types are suitable for different materials. If one wanted to mark wood, for example, the optimum wavelength of light for that material is that produced by a CO2 laser. If one wanted to mark metals, the optimum wavelength would be that produced by a YAG or fiber laser. The material to be marked dictates the type of laser that is needed. There is no such thing as a laser that is well-suited for all materials.

For a demonstration of a laser marker in action, check out the video below:

How To Use A Fiber Laser Marker

The following is a brief description of how to use a fiber laser marker and is only intended to “jump start” a new user. It makes the assumption that the marker has a steered beam (galvo-driven) optical system.

Before you begin to mark something, first you have to answer the following three questions:

Generally, the most challenging question to answer for new users is, “How are you going to mark it?” To address that question, one needs to know a bit about how the fiber laser and the marking system work.

If you are familiar with laser marking then you probably know that the three most important settings that can be changed to affect how a part is marked are:

This is how fast the laser beam travels over the part being marked. Steered beam systems use scanning galvanometers with mirrors attached to them to move the laser beam through the lens and over surface of the part. The galvos can usually steer the laser beam over the part much faster than the laser has the ability to mark the part appropriately, so galvos rarely run at their maximum potential speed. Galvo manufacturers will give speed specifications that state that the galvo is capable of “hundreds of characters per second.” At those speeds and for most materials, however, the laser does not have enough time on any portion of the part to do any work. Useful speeds depend on the material and the laser power. Speeds of 30 to 35 inches per second might be fine for removing anodize on aluminum, but engraving deeper into metals will be better accomplished at a speed of 5 inches per second, making multiple passes over the part.

The laser can only put out as much power as it is designed for. Generally speaking, more power out of the laser will allow either more material removal or allow the part to be marked at higher galvo speeds. In a Jimani Langolier marker, power is calibrated in watts. A 20 watt laser can only put out 20 watts. The appropriate power to use depends on the material being marked and the desired result. Clear polycarbonate, for example, will get a black surface mark with only 3 or 4 watts of laser power.Anodize can be ablated off the surface of an aluminum substrate with 12 to 15 watts of laser power, producing a very white mark. Deep engraving into steel (say .015 to .020” deep) requires every watt of power capable of being produced by a 50 watt fiber laser.

Unless you have a CW laser (and you won’t have one of those if your laser is used for marking), the laser puts out pulses of light rather than a continuous beam of light. Each of these pulses has a very short duration, and the time of the pulse is measured in nanoseconds. Fixed pulse width fiber lasers are only capable of producing laser pulses with the same time duration (pulse width) for each laser pulse, although they are capable of varying the number of those pulses produced each second (pulse frequency). Changing the pulse frequency affects the number of laser pulses striking the part at any location and the amount of laser energy in each of those pulses. Lower pulse frequencies tend to vaporize material because of the higher energy content of each pulse. Higher pulse frequencies tend to heat the surface of the part rather than vaporizing material from it. Heating the surface of certain materials such as steel or titanium can produce some interesting results. Rather than vaporizing material away, the heat from higher pulse frequencies can cause an oxide layer to form, producing a highly visible permanent marking without damaging the surface of the material (see Figure 1).

A variable pulse width fiber laser can cause each laser pulse to be on for a longer or shorter period of time, yielding results like oxide layers of various colors.  Very short laser pulse widths make it possible to mark materials that would otherwise melt with longer laser pulse widths, such as certain types of plastic.

Since the laser beam is pulsed as it moves over the work, a line drawn by the laser might look like this:

If either the galvo speed is decreased or the output pulse frequency is increased, the laser pulses will overlap each other.

This means that each location on the drawn line will be impacted by more laser pulses, since those pulses overlap each other. But, if the pulse frequency is so high that the energy per pulse is significantly reduced, then the net result might be a weaker, shallower mark on the part because of the reduced energy per pulse.

There is a tradeoff between the energy per pulse and the number of overlapping pulses. There are other variables that can affect the quality of the mark such as fill density and spot size. Those topics are beyond the scope of Laser Marking 101 and are best discussed after one has a good understanding of the relationship between speed, power, and pulse frequency.