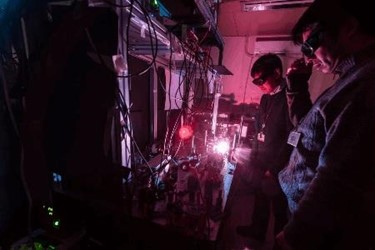 MXenes, conductive materials widely used in many industries, now have one more promising application: helping lasers fire extremely short femtosecond pulses, which last just millionths of a billionth of a second. The finding, made by an international team of researchers, opens up avenues for developing advanced femtosecond pulse lasers, which can be used for precision eye surgery and material processing.

MXenes are a class of two-dimensional materials made of transition metals -- the metals occupying the central block of the periodic table -- combined with carbon and/or nitrogen. Despite their promising performance in a broad range of applications, including energy storage and gas sensing, their potential use for ultrafast optics had not been explored.

Researchers at the Korea Institute of Science and Technology (KIST) and the University of Seoul in Korea, together with colleagues at Drexel University in the US, tested a MXene made of titanium carbonitride to fabricate a 'mode-locking' device. The apparatus was placed in the laser cavity and found to produce stable laser pulses only 600 femtoseconds (quadrillionths of a second) long.

This metallic MXene based device was found to be applicable for long wavelength mid-IR lasers, which is a very strong advantage for laser applications.

Femtosecond-long laser pulses have many applications, such as in i-Lasik precision eye surgery, in which tiny areas of tissue need to be destroyed in a time short enough that the energy used for this purpose can't diffuse to the surrounding tissues and damage them. These laser pulses are also used to fabricate micro-sized sensors and devices.

The research can be used to develop strategies for fabricating saturable absorber materials, which absorb less light as its intensity increases. This optical phenomenon is one of several generated as a result of a concept called nonlinearity. Nonlinear optics has been one of the most rapidly growing scientific fields in past decades. "The discovery of promising nonlinear optical materials will play a pivotal role in the evolution of future optics and its impact can be very significant in both fundamental aspects and industrial applications," write the researchers in their study published in the journal Advanced Materials.

About Korea Institute Of Science And Technology (KIST)
The Korea Institute of Science and Technology (KIST) was founded as the republic's first science and technology research institute in 1966. Since then, many government-funded research institutes have been modeled after it, with KIST setting the standard as the national think tank for science and technology. KIST celebrated its 50th anniversary in February 2016. Its aim for the next 50 years is to meet global challenges head on, such as managing aging societies and finding solutions for shortages in energy, food and resources, while leveraging convergence research and open cooperation.