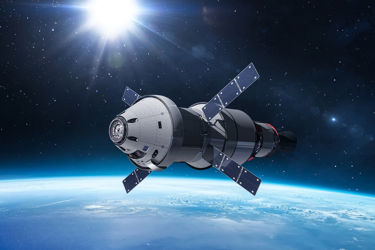 3D printing – or additive manufacturing – is the process of making three-dimensional objects from a digital file. 3D printing encompasses many technologies and materials and is used in almost every industry. Examples of finished goods include:

* Bonus point if you knew that a maquette is a scale model or rough draft of an unfinished sculpture.

Before we jump into the role 3D printing is playing in space tech, let’s take a quick look back at the history of this technology. I’m going to quickly review space-related milestones here, but you can take a deeper dive by checking out this 3DSourced article.

3D printing can trace its roots back to 1981 when “Dr. Hideo Kodama at the Nagoya Municipal Industrial Research Institute published details concerning a ‘rapid prototyping’ technique. This research was the first piece of literature to describe the layer-by-layer approach so intrinsic to 3D printing.”

Flash forward to 2008 when 3D-printing pioneer Dr. Behrokh Khoshnevis thought “if we could print concrete on a 3D printer on Earth, an adapted version could be made that could print with locally-sourced lunar regolith to create Moon (or Mars) bases for permanent settlements in the near future.”

Five years later, Khoshnevis won NASA’s grand prizes, also winning key prize money to continue researching 3D printing in space. That same year, NASA announced it had created the first 3D-printed object in space, opening the door “for future space manufacturing and the ability of future astronauts to create tools on-demand in space. If the team in space needed a particular item, they could be ‘beamed’ the design from Earth at light speed, and 3D print the tool out in space.”

Since then, dozens of companies have been created or invested in developing and refining 3D printers to be used specifically in space, an approach that holds several advantages over Earth-situated manufacturing. With 3D printing technologies, rather than exporting tools and equipment from Earth into space, astronauts have the option to manufacture needed items directly. On-demand patterns of manufacturing make long-distance space travel more feasible and self-sufficient as space excursions require less cargo. Mission safety is also improved.

Before we take a deeper dive into the two main ways 3D printing is being used as space tech – creating parts on earth to get to space, as well as to create needed tools (and food!) once in space – feel free to take this Tech Briefs test to see how much you already know. Go ahead, we’ll be here when you’re done. **

Not Only Printing For Space, Printing In Space

The inspiration for this article was a Forbes article about how Relativity Space is working to be the first aerospace manufacturing company to send an entirely 3D-printed rocket, Terran1,  into space. As of this writing, the $12 million launch and test flight is scheduled for sometime in December – maybe New Year's Eve – from Cape Canaveral’s Launch Complex 16.

“With additive manufacturing technology cutting launch costs by as much as 95% compared to the NASA space shuttle program, the door is open for more services from orbit driving stiff competition among rocket makers,” writes Forbes. “Chipping millions off the cost of deploying satellites recently garnered Launcher funding from the U.S. Space Force to further develop its E-2 3D-printed, high-performance liquid rocket engine for the Launcher Light launch vehicle.”

In December, California-based Launcher is scheduled to deploy its Orbiter satellite platform powered by 3D-printed rocket engines and “UK-based aerospace company Orbex hopes its 3D-printed rockets, made with the latest metal 3D printer from German manufacturer EOS, will blast off from Scotland.”

The 3D-printing technology utilized by these companies is saving millions of dollars by cutting costs and speeding up production. It’s also simplifying the supply chain as some launch vehicles can be built with only four raw metals. Oh, and the number of parts needed can be reduced by 100 times as well.

AMFG, a provider of MES and workflow software that helps companies manage and scale their additive manufacturing processes, writes, “One of the biggest advantages of 3D printing for rocket parts is the ability to iterate designs very quickly.

“A 3D printer can create rocket parts directly from a design file without the need for tooling. If a part requires modifications, engineers can simply make changes to an original CAD file and create a new, modified design much more quickly than traditional processes would allow.” This allows for more design flexibility, simplified assembly, and ultimately less expensive rocket parts.

So, we’ve looked at how 3D printing technology is helping get us to space quicker and for less money. But how is the technology going to be used in space? 3DSourced writes it will be by supporting multi-year space flights, saving lives in the event of a disaster, and printing parts – even human organs.

3D printing in space comes with several obstacles, the most significant of which is overcoming the energy hurdle for boosting materials into orbit. Once this barrier is significantly reduced in cost per pound – currently estimated at $10,000/per pound by NASA – the technology will become much more attractive to entrepreneurs. After the heavy capitalization costs of assembling the mining and manufacturing facilities are paid, the production will need to be economically profitable to become self-sustaining and beneficial to society.

“The economic requirements of space manufacturing imply a need to collect the requisite raw materials at a minimum energy cost. The cost of space transport is directly related to the delta-v or change in velocity required to move from the mining sites to the manufacturing plants. Bringing material to Earth orbit from bodies such as Near-Earth asteroids, Phobos, Deimos or the lunar surface requires far less delta-v than launching from Earth itself, despite the greater distances involved. This makes these places economically attractive as sources of raw materials.”

Once the financial hurdles are cleared and 3D printing in space becomes the norm, one use will be to print body parts and organs. In fact, according to Engadget, “NASA, Redwire, and the Uniformed Services University of the Health Sciences Center for Biotechnology (4DBio3) are sending a new 3D printer to the International Space Station, Redwire's BioFabrication Facility, to bioprint a human knee meniscus in orbit and study the result on Earth.” Redwire’s long-term goal is to print entire organs in space, something that would doctors to replace damaged body parts without resorting to donations or inorganic implants.

Beyond saving lives, Popular Mechanics notes that 3D printing in space “can be used to manufacture niche tools and parts when they're needed, so astronauts don't have to carry extra stuff into orbit.” But we can think bigger than parts – entire lunar bases could be made from 3D-printed bricks.

SYFY Media writes, “A team of scientists from the University of Central Florida has devised a way to do just that, using lunar regolith, saltwater, and additive manufacturing to make bricks.” Assuming they’re right it’s possible that entire structures could be built in space with local materials, minimizing the number of supplies we have to take with us.

The Future Is Here For 3D-Printed Space Technology

Already in use on the ISS and in building rockets, and with future applications ranging from aiding in the colonization of the moon and Mars, printing food, and the creation of clothes for astronauts, 3D printing brings with it the promise of lowering costs and moving the needle on the space exploration timeline.