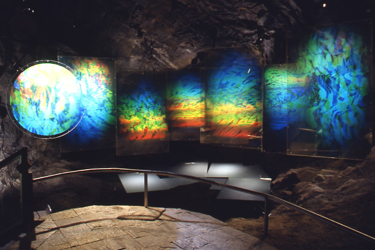 "Magician of Light" tells the story of how Ishii combined her love of both art and science to capture the magic of light and create an iconic art style.

“Holography is a medium that ‘spins out’ light. Everyone has likely seen such breath-taking moments as a rainbow that appears after the rain, a burning-red sunset, or the deep blue at twilight that envelops and submerges all things. In such moments, we are reminded of the existence of sunlight and become conscious of nature itself,” said Ishii.

“Optics is the physics you can see,” said P. Scott Carney, Optica’s Chief Scientist. " Setsuko Ishii channels the beauty that optical scientists see in their work and makes it speak to everyone.”

Originally pursuing her passion for science, Ishii trained in applied physics at the Tokyo Institute of Technology (TIT) and painted in her spare time. After graduating, she began her second career as an artist, studying fine art and European oil painting at the Sokei Academy of Fine Arts.

Her artistic development continued when she enrolled at the L’École National Superieur des Beaux-Arts to study fine arts and painting. Eventually showing her work publicly, Ishii felt her early love of physics pull her back toward science. “Despite having solo and group exhibitions, I asked myself: ‘is painting a suitable medium for me?’”

Ishii would find the solution to her dilemma in 1974 while walking through the streets of Tokyo. She was “completely mesmerized” by the spectacular sight that caught her eye: “When I moved, I saw an image in mid-air shift its position, but I could not grasp it even though it was in the palm of my hand. This was my first encounter with a hologram.”

Today, Ishii is celebrated as one of the most prolific holographic artists in the world. Her exhibitions and public installations have been shown all around the globe, from Palazzo Fortuny in Venice, Italy, to the Walker Hill Art Center in Seoul, South Korea. She has been named artist in residence at the Museum of Holography in New York three times and artist in residence in Paris.

Optica has been a respected authority on light science and technology for more than a century, with a heritage dating back to the Optical Society of America's founding in 1916. Optica’s publications, programs, events, and advocacy support the optics and photonics community as they invent the future and uncover the beautiful secrets of the universe with light. Today, Optica unites a diverse population of students, scientists, engineers and professionals working in light science and technology. The society is a champion for the field and advocates for the interests of its members around the world.

The Optica Community series is a collection of extraordinary life stories celebrating Optica's global diversity and the values its members share.

Readers can find the Optica Community series at https://www.optica.org/en-us/about/optica_community/.