Extending The Lifetime Of Atoms Using A Mirror 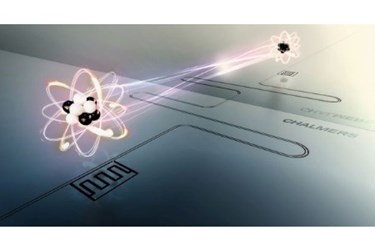 Researchers at Chalmers University of Technology have succeeded in an experiment where they get an artificial atom to survive ten times longer than normal by positioning the atom in front of a mirror. The findings were recently published in the journal Nature Physics.

If we add energy to an atom, we say that the atom is excited, and it normally takes some time before the atom loses energy and returns to its original state. This time is called the lifetime of the atom. Chalmers’ researchers have placed an artificial atom at a specific distance in front of a mirror. By changing the distance to the mirror, they can get the atom to live longer, up to 10 times as long as if the mirror had not been there.

The artificial atom is actually a superconducting electrical circuit that the researchers make behave as an atom. Just like a natural atom, you can charge it with energy, excite the atom, which it then emits in the form of light particles. In this case, the light has a much lower frequency than ordinary light and in reality are microwaves.

“We have demonstrated how we can control the lifetime of an atom in a very simple way,” says Per Delsing, Professor of Physics and leader of the research team.

“We can vary the lifetime of the atom by changing the distance between the atom and the mirror. If we place the atom at a certain distance from the mirror the atom’s lifetime is extended by such a length that we are not even able to observe the atom. Consequently, we can hide the atom in front of a mirror,” he continues.

The experiment is a collaboration between experimental and theoretical physicists at Chalmers University of Technology, the latter have developed the theory for how the atom’s lifetime varies depending on the distance to the mirror.

“The reason why the atom “dies”, that is it returns to its original ground state, is that it sees the very small variations in the electromagnetic field which must exist due to quantum theory, known as vacuum fluctuations,” says Göran Johansson, Professor of Theoretical and Applied Quantum Physics and leader of the theory group.

When the atom is placed in front of the mirror it interacts with its mirror image, which changes the amount of vacuum fluctuations to which the atom is exposed. The system that the Chalmers researchers succeeded in building is particularly well suited for measuring the vacuum fluctuations, which otherwise is a very difficult thing to measure.

Facts about the research
The sample that the researchers used is fabricated on a silicon chip and contains two key elements. The first is a superconducting circuit forming the artificial atom. The second part is a short circuit that acts as a mirror. By sending a very weak signal to the atom, researchers can measure its lifetime. At the same time, they can vary the effective distance to the mirror. This is done by changing the atomic resonance frequency, while the actual distance remains constant. By doing this you can control the distance measured in the number of wavelengths of light/microwaves. A frequency of 4.8 GHz was used in the experiment, which is close to the radio waves used in wireless networks. The experiments were performed at very low temperatures, close to absolute zero (30 mK) to ensure the atom is in its ground state at the start of the experiment.