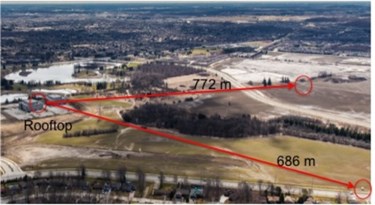 In the world of quantum science, Alice and Bob have been talking to one another for years. Charlie joined the conversation a few years ago, but now by enforcing the space-like separation of the three parties, scientists have demonstrated full quantum nonlocality with more than two entangled photons.

For the first time, physicists at the Institute for Quantum Computing (IQC) at the University of Waterloo have demonstrated the distribution of three entangled photons at three different locations (Alice, Bob and Charlie) several hundreds of metres apart.

The findings of the experiment, Experimental Three-Particle Quantum Nonlocality under Strict Locality Conditions, are published in Nature Photonics today.

Once described by Einstein as “spooky action at a distance”, this three-photon entanglement leads to interesting possibilities for multi-party quantum communication.

Quantum entanglement is a phenomenon of quantum mechanics where an extremely strong correlation exists between quantum particles. These quantum systems cannot be described independently of each other despite the distance separating them. This disregards what Einstein called the "principle of local action," the rule that distant objects cannot have direct influence on one another, and that an object is directly influenced only by its immediate surroundings. By measuring these correlations, the scientists were able to demonstrate this quantum nonlocality, the ability of the particles to instantaneously “know” about each other’s state, even when separated by these large distances.

To truly test that the hidden local variables are not responsible for the correlation between the three photons, IQC scientists needed the experiment to close what is known as the locality loophole. They achieved this separation of the entangled photons in a way that did not allow for a signal to coordinate the behaviour of the photons, by beaming the entangled photons to trailers parked in fields several hundred meters from their lab.

“Correlations measured from quantum systems can tell us a lot about nature at the most fundamental level,” said co-author Professor Kevin Resch, Canada Research Chair in Optical Quantum Technologies and recent winner of the E.W.R. Steacie Fellowship from the Natural Sciences and Engineering Research Council of Canada (NSERC). “Three-particle entanglement is more complex than that of pairs. We can exploit the complex behaviour to rule out certain descriptions of nature or as a resource for new quantum technologies.”

The project team studied the correlations of three photons in a Greenberger-Horne-Zeilinger (GHZ) state – a type of entangled quantum state involving at least three particles.

First, photon triplets were generated in Resch’s lab – the Alice in the experiment. Then, the first photon was delayed in a 580m optical fibre in the lab while the two other photons travelled up 85m of optical fibre to the rooftop where they were sent through two telescopes. Both photons were then sent to two trailers, Bob and Charlie, about 700m away from the source and from each other. 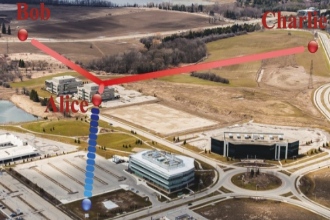 To maintain the space-like separate in the experiment, a fourth party, Randy, located in a third trailer randomly selected each of the measurements that Alice was to perform on her photons in the lab, outside of any influence from Bob and Charlie.

Each trailer contained detectors, time-tagging devices developed by IQC spin off company Universal Quantum Devices (UQD), and quantum random number generators. To ensure the locality loophole was closed, the random number generators determined how the photon at each trailer would be measured independently. The UQD time tagging devices also ensured the measurements happened in a very small time window (three nanoseconds), meaning that no information could possibly be transmitted from one location to the other during the measurement period ­– a critical condition to prove the non-locality of entanglement.

“The idea of entangling three photons has been around for a long time,” said Professor Thomas Jennewein, a co-author of the paper. “It took the right people with the right knowledge to come together to make the experiment happen in the short time it did. IQC had the right mix at the right time.”

The experiment demonstrated the distribution of three entangled particles, which can eventually be used to do more than pairwise communication where only one party can communicate with another. It opens the possibility for multipartite quantum communication protocols, including Quantum Key Distribution (QKD), third man cryptography and quantum secret sharing.

“The interesting result is that we now have the ability to do more than paired quantum communication,” said the paper’s lead author Chris Erven, a former IQC PhD student who is now a research assistant at the University of Bristol. “QKD, so far, has been a pairwise system – meaning that it works best and with less assumptions when you’re only talking with one other person. This is the first experiment where you can now imagine a network of people connected in different ways using the correlations between three or more photons.”

About the University of Waterloo
In just half a century, the University of Waterloo, located at the heart of Canada's technology hub, has become one of Canada's leading comprehensive universities with 35,000 full- and part-time students in undergraduate and graduate programs. Waterloo, as home to the world's largest post-secondary co-operative education program, embraces its connections to the world and encourages enterprising partnerships in learning, research and discovery. In the next decade, the university is committed to building a better future for Canada and the world by championing innovation and collaboration to create solutions relevant to the needs of today and tomorrow. For more information, visit www.uwaterloo.ca.

Source: The University of Waterloo