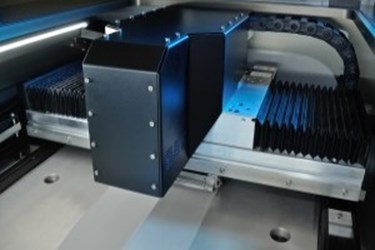 A this year’s EuroMold, which takes place in Frankfurt from November 25-28, 2014, the Fraunhofer Institute for Laser Technology (ILT) will present its new SLM machine design and exposure concept. This solution makes it easy to scale productivity and building space at significantly lower cost than previous machine designs allowed.

Additive manufacturing via selective laser melting (SLM) has been successfully used to make prototypes and small-series production runs of predominantly compact components for a number of years now. But users want the ability to increase productivity via higher build-up rates, and would like more flexibility in terms of available building space. Beyond this, it remains vitally important for series production on an industrial scale to have robust process engineering with reproducible component quality and the ability to monitor processes.

Experts are currently pursuing several approaches to increasing productivity and building space. Until now, productivity has mainly been boosted by using higher laser power in combination with optics systems that allow operators to adjust the beam diameter. Larger building spaces are currently achieved through the use of a movable single optical system or multiple parallel beam sources and scanner systems.

Systematic advantages of the new design

Scientists at Fraunhofer ILT used funding provided by the Cluster of Excellence “Integrative Production Technology for High-Wage Countries” to develop, design and build a new machine concept at their site in Aachen, Germany. Their design dispenses with scanner systems altogether and instead relies on a printer head featuring several individually controllable diode lasers that is moved using linear axes.

According to information from Fraunhofer, the advantage of multi-spot processing is that it means the system’s build-up rate can be increased significantly by adding a virtually unlimited number of beam sources — with no need for modifications to the system design, exposure control software or process parameters. The new plant design also makes it possible to increase building space simply by extending the travel lengths of the axis system and without changing the optical system.

In addition, the processing head has a local shielding gas flow system that guarantees a constant stream of shielding gas at each processing point, regardless of the size of the installation space. This is essential for achieving position-independent, reproducible component quality. The new design also allows process monitoring systems to be incorporated into the production system. These monitoring systems can also be set up in much simpler form than current coaxial systems allow.

Experts from Fraunhofer ILT will use a laboratory demonstrator to present their new SLM machine concept at the joint Fraunhofer booth C66 in Hall 11.