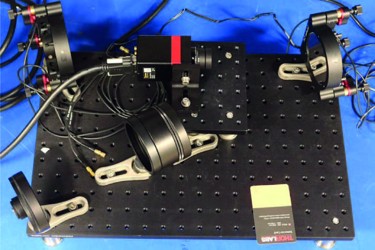 Long baseline optical interferometers are ground-based observatories that study the cosmos in high resolution at visible and infrared wavelengths. An interferometer works differently to conventional imaging telescopes. Starlight is captured with small telescopes that are separated from each other by distances up to a few hundred meters.

The output of each telescope is a collimated beam around 10 cm in diameter. These beams are relayed towards a centralized laboratory where they are reduced in size to around 1 cm in diameter, then combined with beams from other telescopes to form interference fringes on a detector. By analyzing the fringe patterns obtained from multiple pairs of combined beams, we can reconstruct an image of the target under observation.

The Magdalena Ridge Observatory Interferometer (MROI) will analyze the fringe patterns obtained from multiple pairs of combined beams to reconstruct an image of the target under observation, such as imaging geostationary satellites to enhance space situational awareness. The system uses an Owl 640-II camera for SWIR imaging.