Could We One Day Steer Lightning With Lasers? 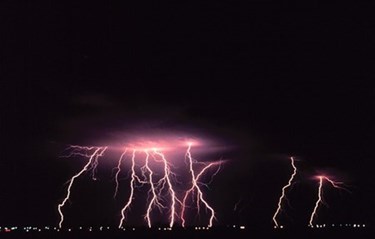 Lightning dart across the sky in a flash. And even though we can use lightning rods to increase the probability of it striking at a specific location, its exact path remains unpredictable. At a smaller scale, discharges between two electrodes behave in the same manner, streaking through space to create electric arcs where only the start and end points are fixed. How then can we control the current so that it follows a predetermined path? Professor Roberto Morandotti and his colleagues have discovered a way to guide electric discharges--and even steer them around obstacles--through the clever use of lasers. This scientific breakthrough was published on June 19, 2015, in Science Advances, the new open-access journal from the prestigious editors of the international journal Science.

Using the Advanced Laser Light Source (ALLS) facility, researchers from the INRS Énergie Matériaux Télécommunications research centre tackled this challenge, which had previously been the subject of intensive research, particularly in the 1970s.

Electric arcs have long been used in such technologies as combustion engines, pollution control applications, lighting, machining and micromachining. Potential applications could multiply with the ability to precisely control the path they take. A first step in this direction has been made and research into the new possibilities and parameters for guiding electric arcs promises to spark researchers' creativity.

Recent scientific and technical advances, as well as the ingenuity of Professor Morandotti's team (particularly researcher Matteo Clerici, a postdoctoral fellow with the research group at the time of the experiments), set the stage for this spectacular demonstration, where we see an electric charge follow a smooth path along a straight or parabolic trajectory.

Experimental figures show how different shaped lasers give discharges distinct properties and trajectories. By combining beams, it is even possible to achieve an S-shaped trajectory, with all other kinds of trajectory achievable in principle.

In his bold quest for knowledge, Professor Morandotti wanted to determine whether the self-healing properties of certain shapes of laser beams (such as Airy and Bessel beams) could be put to use in these new experiments. This attribute means that a laser beam whose intensity peak is blocked by an obstacle can reconstruct itself once past the object. Professor Morandotti's team placed an object between the two electrodes and observed that the discharge leapt over the obstacle, without damaging it, and returned to its laser guide on the other side.

"Our fascination with lightning and electric arcs aside, this scientific discovery holds out significant potential and opens up new fields of research," said Yves Bégin, vice dean of research and academic affairs at INRS. "This spectacular proof of concept, which was conducted over a distance of a few centimetres, required the high-power lasers, state-of-the-art facilities, and extraordinary research environment that our professors helped to create at INRS. Being able to work in such cutting-edge labs enables our students and postdoctoral fellows to embark on the path of scientific discovery even while still in school."

Institut national de recherche scientifique (INRS) is a graduate-level research and training university and ranks first in Canada for research intensity. INRS brings together some 150 professors and close to 700 students and postdoctoral fellows at its four centres in Montreal, Quebec City, Laval, and Varennes. Its basic research is essential to the advancement of science in Quebec and internationally even as it plays a key role in the development of concrete solutions to the problems faced by our society.