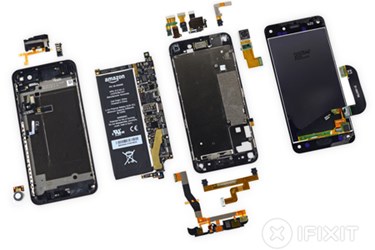 On July 25, Amazon released its first smartphone, and it didn’t take long for the internal components of the device to get leaked.

“We have packed the Fire phone with premium materials,” Amazon CEO Jeff Bezos said in an interview with the Wall Street Journal. “The industrial design is very high end.”

While the fiscal success of the new smartphone is to be determined, a recent teardown and analysis of Amazon’s Fire phone attests to its high-end industrial design.

Before the phone was even released, iFixit — a repair company known for dissembling prominent products and revealing their components — dug into Amazon’s debut smartphone. Their comprehensive evaluation exposed a hard-to-repair phone littered with high-end electronic components from prominent chip-makers like Qualcomm, Samsung, and NXP Semiconductors.

From a communications perspective, here are some of the notable inclusions:

The phone also includes sophisticated sensory technologies to support its “Dynamic Perspective” feature, which allows for 3D visuals and tilt-control. The enabling technology for these features includes four infrared sensors and four corresponding infrared cameras housed in the front of the phone, according to the iFixit teardown. The Dynamic Perspective system also incorporates infrared LEDs, a gyroscope, an accelerometer, a magnetometer, a barometer, a proximity sensor, and an ambient light sensor.

In addition to the four front-facing infrared cameras, Amazon’s Fire includes two additional cameras. The first is a 2.1 MP front-facing camera, and the second is a 13 MP rear-facing camera, which features an InvenSense IDG2021 2-Axis optical image stabilization gyroscope.

With all of those high-end components comes cost, and, according to a recent article from Re/Code citing research firm IHS, the components used in the Amazon Fire cost a combined $205. That component cost is higher than Apple’s iPhone 5S but lower than Samsung’s Galaxy S5.

Only time will tell whether Amazon’s new phone will be a success. According to Re/code, critics like Andrew Rassweiler of IHS believe that the phone is “a pretty standard mid-range phone from a hardware perspective,” with only one gimmicky, differentiating feature — Dynamic Perspective.

“Amazon has sunk a lot of research and development money into this phone,” Rassweiler said in the Re/code article. “The only way Amazon will make that back is by selling a lot of them.”