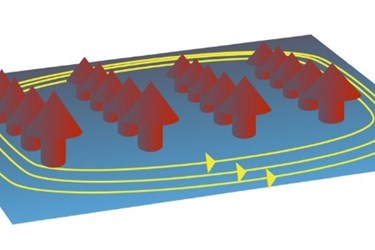 The results are important in the search for new quantum states and possible use in future electronics applications.

The work examines the properties of superconductors in low temperatures. The results are important in the search for new quantum states and possible use in future electronics applications.

– We know that in a quantum state, electric current moves without resistance on the surfaces of superconducting metals. This is an interesting phenomenon that we wanted to study in more detail. Topological superconductors differ from normal ones in that they have a current constantly moving around their edges. This current contains exotic particles called Majorana fermions. We obtained reliable signals from these particles in tests performed at the end of last year, explains Academy Research Fellow Teemu Ojanen from the Aalto University Low Temperature Laboratory.

– The edges of a topologically superconducting surface are unidirectional, and thus the current is only transported in a single direction. However, the number and direction of edge states can vary. This situation could be compared to a traffic circle in which the number of lanes and the direction can change, Ojanen continues.

It has been theoretically predicted that Majorana fermions have properties that can help create complicated quantum states, for example, by braiding the particles around each other. The structures produced in this manner can be utilised for coding information and future applications likely include quantum computers.