A New Technology Allows Visualisation Of Methane Emissions As They Happen 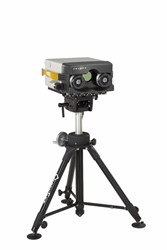 Telops, a company based in Quebec (Canada) and specialized in the design and production of infrared and hyperspectral infrared cameras, has developed a camera that is able to accurately detect minute methane leaks and emissions and film them in real time.

Methane is a powerful greenhouse gas. According to the United States Environmental Protection Agency (EPA), “Pound for pound, the comparative impact of CH4 on climate change is more than 25 times greater than CO2 over a 100-year period.” It is released into the atmosphere from many different sources, both human (landfill sites, animal husbandry) and natural (wetlands, glaciers). “This is why it is so critical to be able to detect in a simple and efficient manner the exact location from which they emanate,” says Martin Chamberland, Telops’ vice-president.

With the Telops Hyper-Cam Methane, scientists are able to detect and identify methane present in a scene, and to locate it precisely in an image or video, pixel by pixel. Recently, scientists from Linköping University, in Sweden, were thus able to « film » methane emissions in real time – a breakthrough that could play a significant role in the fight against climate change.

The Hyper-Cam Methane is more sensitive than anything that has been developed before, and is able to detect extremely small amounts of methane, up to 1 ppm (part per million). This high sensitivity makes all the difference, according to Magnus Gålfak, the Linköping University professor who led the study published in Nature. “Being able to measure on a small scale is crucial.”

Since the Hyper-Cam Methane is both compact and light, compared to other hyperspectral cameras available on the market, scientist can use it directly on site, even in hard-to-reach areas.

Moreover, it can be used to monitor vast areas in the same image, something that was not possible before. And thanks to its airborne platform that reduces and compensates for aircrafts vibrations and yaw, it is possible to efficiently map methane emissions of an entire region from the air.

For more information, please visit these pages and/or contact us:

http://tinyurl.com/hy35tpl (the Linköping University about the breakthrough)